Visions from the New California
April 14 – May 31
Main Gallery 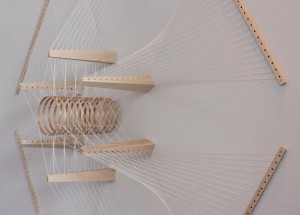 Curated by Mark Steven Greenfield (for 18th Street Arts Center) and Lauren Davies (for Kala Art Institute in San Francisco), this two-city exhibition features recipients of the Alliance of Artists Communities’ 2012 ‘Visions from the New California’ Award. Visions surveys the dynamic approaches and sensibilities of artists working throughout the state.

“There are few occasions when the breadth of work in a group exhibition so serendipitously finds its own cohesion. Thankfully such is the case with the offerings of the “Visions from the New California” exhibition at 18th Street Arts Center.  To my mind, the most conspicuous thread running through the exhibition is one of “pan-culturalism”, as evidenced by the priorities engendered in the work, as well as the diverse backgrounds of the artist.  The work suggests a rethinking of long held notions of the contemporary Californian aesthetic as envisioned by a cross section of artists representing ideas with decidedly global perspectives. The exhibition features work that deals with issues of race, sex, gender, redefine constructionism, new minimalism, early photography, nostalgic meditations, and the interplay between nature and the man-made.”