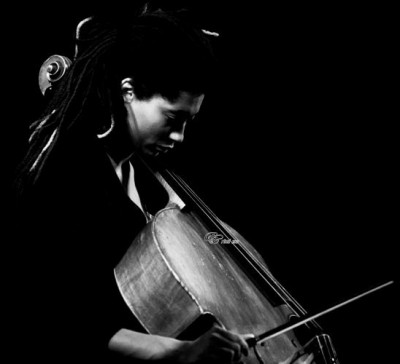 Cellist, conductor, composer and improviser Tomeka Reid is the second recipient of 18th Street Arts Center’s Make-Jazz Residency, funded by the Herb Alpert Foundation. The Residency fosters experimentation by giving exceptional emerging Jazz musicians time to develop new compositions while connecting them to Los Angeles practitioners and audiences. Tomeka Reid will present new compositions developed during the residency as well as works from her extensive repertoire.  She will be joined by Devin Hoff on bass and Jared Mattson on guitar.

Chicago-based cellist, composer and educator, Tomeka Reid has been described as “a remarkably versatile player,” (Howard Reich, Chicago Tribune). Equally adept in classical and jazz contexts, Ms. Reid predominantly finds herself in experimental and improvisatory settings and composes for a wide range of instrumentation, from big band to chamber ensemble. Ms. Reid’s music combines her love for groove along with freer concepts.

As a composer, Ms. Reid has been commissioned by the AACM, the Chicago Jazz Festival and the Chicago Jazz Ensemble and has had several opportunities to showcase her work abroad at festivals such as Umbria Jazz, An Insolent Noise and Vignola Jazz. She has been nominated and awarded residencies for composition with the Ragdale Foundation and the 2nd Annual Make Jazz Fellowship hosted by the 18th Street Arts Center. Ms. Reid was selected as a 2012 participant in the Jazz Composers Orchestra Institute held at the University of California: Los Angeles.

Beach=Culture is an ongoing series of free concerts, lectures, readings and exhibits sponsored by City of Santa Monica Cultural Affairs that take place on Tuesdays in the summer and Mondays in the winter. Docents from the Santa Monica Conservancy are available at the Marion Davies Guest House to discuss the site prior to most Beach=Culture events.

The Annenberg Community Beach House at Santa Monica State Beach is a new public beach facility open to all – no membership required. The Beach House is made possible by a generous gift from the Annenberg Foundation, at the recommendation of Wallis Annenberg, and in partnership with the City of Santa Monica and California State Parks. Additional funding was provided by the US Department of Housing & Urban Development and the federal Preserve America program.