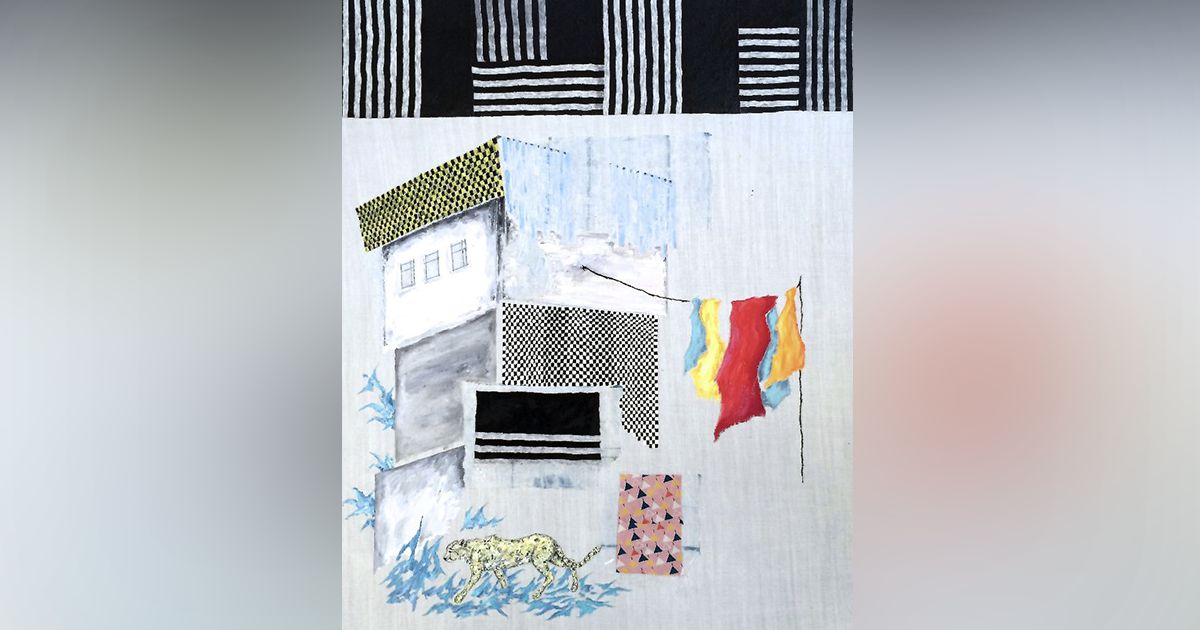 Somewhere between painting, installation, and film, lies the work of Danish artist Bibi Katholm, who began her three-month residency at 18th Street Arts Center in Santa Monica, on October 1. Through the use of carefully selected fabrics and other found objects, Katholm cuts and manipulates her materials, juxtaposing fabrics and paints creating a visual association — not unlike a film editor creating a montage. As much as Katholm’s work is painting, in a physical sense, it is also very much about the process of painting and of image-making. Having graduated in 2008 with an MA in painting from the Royal College of Art in London, Katholm’s work is informed by philosophical thinking. She continually investigates and challenges herself to expose the cracks and fissures of the medium — a medium, which has been consistently called into question since the development of photography in the mid 19th century. In 1839, French artist Paul Delaroche famously declared, “from today, painting is dead.” Through a deconstruction of Katholm’s process, however, we are made aware of a truly dynamic practice that makes up an amorphous, living, and breathing body of work. Fragments are re-cycled and re-invented to create living images that are invariably subject to change, as in nature. What once was a cherished article of clothing, for example, may later be given new life as a work of art, like in Katholm’s recent painting, “Push the Sky Away # Avalanche” (2015).

In Jacques Rancière’s seminal text “The Future of the Image” — which has been influential to Katholm — Rancière discusses two schools of thought in relation to the image. One, that “there is no longer any reality, but only images,” and two, that “there are no more images but only a reality incessantly representing itself to itself.” Ultimately, despite these arguments appearing in direct opposition, Rancière contends, “if there is now nothing but images, there is nothing other than the image. And if there is nothing other than the image, the very notion of the image becomes devoid of content.” The chaos of an image-driven society creates instability, as boundaries between life and art begin to blur. For Katholm, the double mediation of images has become standard. “Layering, filtering, or using the collage technique is no longer just an option,” Katholm remarks, “it’s simply the only way to create a believable representation of a world that is moving too fast for its population to understand it.”

Douglas Crimp notes in his progressive essay, “The End of Painting,” that with the rise of student movements across the world in the 1960s came the birth of institutional critique. Painting began to feel elitist and inaccessible as artists demanded new environments and broader audiences. Artists began to embrace film, video, and performance as mediums. Today, Katholm asserts, “the work of art is a multi-cultural, fragmented, ever-expanding, and self-reflective discourse that attempts to create a bridge between the historical recognition of metaphysical loss and the brave new world of the 21st century.” This loss of being is embodied through a sampling and accumulation of fragments. Katholm’s work becomes emblematic of a very postmodern, contemporary way of thinking — a fresh take on the cinematic montage through a return to painting. The cutting and manipulation of fabric mimics the act of splicing film. Material that once stood alone as a still image is combined with paint to create movement. Each painting contains a number of images in every detail. For example, in “Neon’s Cabin # Rebel Rebel” (2014) the image of the blue cabin was originally painted for her moving image piece “Operation Space Magic.” The layer of black and grey striped fabric, reminiscent of artist Daniel Buren’s patterns, appearing in a number of her works, was formerly a beloved dress by famed designer Vivienne Westwood.

Soviet filmmaker Sergei Eisenstein, known as the father of cinematic montage, hypothesized that one image on its own does not create the same visceral effect as the juxtaposition of images. Montage creates a visual association — the aesthetic becomes political. Katholm adds: “The image holds no truth, if not the truth of limitations and boundaries, of lack and want. In my attempts to create representations of the objective world, I am always confronted with the chaos that undermines all structure and creates rupture and instability… The only truth is movement.”

This physical action, Katholm’s process, is a way to navigate the endless stream of images and information towards something more natural. Growing up in Denmark, a country characterized by its high degree of agriculture and vast rural landscapes, Katholm describes herself as “Nordic,” a term referring to both the organic and the philosophical — nature as a place of solitude, where one is left purely to her own sense and instinct, melancholy, and silence. Nature is the “place where language collapses,” says Katholm. Ranciére describes this as the relationship between the visible and the invisible in “The Future of the Image.” While “words make seen what does not pertain to the visible,” he comments, the image “is a way in which things themselves speak and are silent.” The image has the capacity to show signs, imprinted directly on the body by its history. Each fabric in Katholm’s paintings has a history; sometimes all that is left is their indexical trace onto the image. In “Micro Castle # Westwood vs Harmony” (2014), details reveal the patterns that take shape after a fabric has been applied and later removed. Paint is then added to bring the patterns back to life. What is left behind, their silent speech, is the language of exchange between humans and nature.

American biologist Edward O. Wilson coined the term “biophilia” referring to the intuitive tendency for humans to seek connections with nature. “Intuition is the link between biology and creativity,” claims Katholm. Her painting process, which she calls “biophilia painting,” is the result of her desire for reciprocity with nature. The result being the revitalizing of found materials — or, as Rancière suggests, “the image as raw, material presence.”

From a distance paints and fabrics mesh, obfuscating the process. Upon closer inspection, we begin to distinguish fabrics from other textures, revealing the slippage between images, the apparatus of the painting. In film theorist Jean-Louis Baudry’s “The Ideological Effects of the Cinematic Apparatus,” he refers to the spectator as passive, accepting everything he sees as truth. When continuity editing is implemented in film, smoothly connecting each shot to the next, the spectator rarely questions the experience. When there is a disruption, however, such as a technical difficulty or a rupture in the continuity of the film, “the spectator is brought abruptly back to discontinuity… to the technical apparatus which he had forgotten.” The cinematic mechanisms have been suppressed, but it is only when they are revealed that the viewer is truly liberated from the role as passive spectator. Through Katholm’s gathering of stories, objects, techniques, philosophical musings, and ways of perceiving the world, the narrative is disrupted, and the painterly apparatus is exposed. It is up to the viewer to put together the moving parts. Katholm reveals: “The fragments contained within my work accumulate to form imagined landscapes. These landscapes have become a way of structuring or layering the images filtered through my inner experience, and as such they are free from the restraints of representation and traditional narrative interpretation.

Even when Katholm is not painting, her work refers to painting. Be it films shot on Super 8, revealing her process, or her collaborative platform “In Case We Don’t Die,” her projects run parallel to her practice. “In Case We Don’t Die” is an artist community established by Katholm as a means for artists to support each other through contemporary uncertainties. The project addresses the changing role of the artist; the relationship between aesthetics, the social, and the political; and the potential for a shared creative process. “These days everyone experiences increasing pressure of living in a culture where speed, excess, and expansion put our collective nervous system to the test,” Katholm explains. Through clever self-referentiality — the title perhaps also alluding to the continual threat to painting’s mortality — “In Case We Don’t Die” exists as both an online platform (incasewedontdie.com) and a series of group exhibitions, which have so far taken place in Berlin, Copenhagen, London, and Los Angeles.

During her residency at 18th Street Arts Center, Katholm has been working on an entirely new body of work, which will be on display at her first U.S. solo exhibition, “The Image will come at the Resurrection,” opening on November 13 at Daily Dose in downtown Los Angeles. While still retaining their Scandinavian minimalist appearance, the new works have been influenced by her time in Los Angeles, both in the physical fabrics — many of which were found in the downtown fashion district — as well as in the bright and natural aesthetic, inspired by time spent at Santa Monica beach. “18th Street has given me this amazing opportunity to focus on my work in a place that seems alien, but also strangely familiar,” remarks Katholm. “Everything here feels cinematic — the way we experience time… [and] the warm, expanding landscape.” It is a stark contrast from the cold, dark winters in Denmark. The exhibit will run through December 17, and in addition to new work created at 18th Street, the show will include moving image work, and several site-specific installations made from locally-sourced fabrics.

“The Image will come at the Resurrection,” curated by Alex White, will be on view from November 13 through December 17. The opening reception will be held Friday, November 13 from 6 to 9 p.m. at Daily Dose Cafe 1820 Industrial St., Los Angeles.