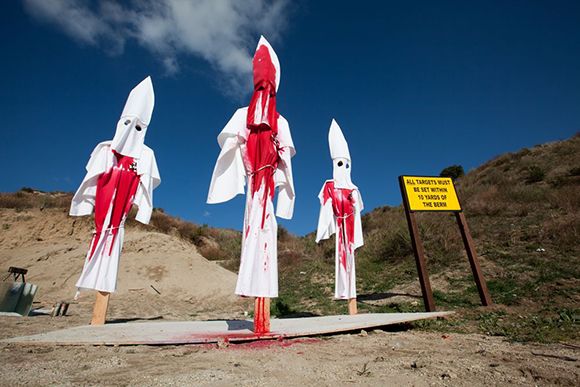 Yael Lipschutz is 18th Street Arts Center’s 2013-14 Curator-in-Residence. She is a curator and art historian whose focus is on under-recognized artists from the recent history of Los Angeles. As Archivist for the Noah Purifoy Foundation, she has been instrumental in bringing this important artist’s work and message to a broader public. She is collaborating with two Los Angeles museums on retrospectives of influential but lesser known artists, Purifoy and the Beat-era occultist and painter Cameron, who was associated with Wallace Berman’s Semina circle. She has curated exhibitions including For the Martian Chronicles at L&M Arts in Venice, a group show that paid homage to the late science fiction writer Ray Bradbury. For Pacific Standard Time, she curated a shooting range where artists shot at targets of their own making, in reference to Niki de St Phalle’s “Shooting Pictures” created in the California desert 50 years before. Lipschutz, who earned her PhD from USC, is a curator who favors the offbeat over the academic. These different projects all reflect her love of iconoclastic artists, defined by deeply personal visions, whose work and visibility benefit greatly from her scholarly attention.

Yael Lipschutz’s work with the Noah Purifoy Foundation has, in its own right, firmly established her dedication to Los Angeles art history. With Franklin Sirmans, she is also the co-curator of Purifoy’s upcoming retrospective exhibition at LACMA to open in spring 2015. Purifoy, who died in 2004, spent much of his life working in the city and was deeply affected by the 1965 Watts Rebellion. Lipschutz writes, “For Purifoy, what was lost in the rebellion was an ideal: the ideal of the commodity — as — life — fulfilling — wish — image; the lifestyle this ideal implied (bourgeois); the idea that obtaining such a lifestyle would somehow allow one to move past the racial/class barriers that structured African American life.”1 His work took a similar turn as he began to work with discarded materials and detritus of the streets and to abandon his earlier Modernist aesthetic. Purifoy pursued his commitment to humble forms of art-making and to art education with great passion, and abandoned art for decades with equal fervor. His resurrection as an artist came after years of working as a social worker in public mental health services, after which time he was invited to serve on the California Arts Council and reengaged as a leader for social change through the arts. Purifoy’s Foundation is on the site where he developed a large outdoor sculpture installation, late in his life, after having abandoned or destroyed much of his earlier creative output. He is an artist whose community-oriented values and keen sense of social justice resonate strongly with 18th Street Arts Center’s own founding mission.