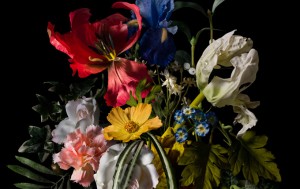 Traversing a broad time-span in Japanese culture, Michiko Yao explores both the historic and contemporary relationship between Western and Japanese imperialism from the Edo period until today. In the video work Samsara Pleasure Principle and accompanying photographs, Yao’s compositions reference both Dutch Golden Age painting and ikebana (the art of Japanese flower arrangement), drawing upon the cultural exchange that evolved through the trading relationship between Japan and the Netherlands. The flowers themselves are artificial, suggesting a stylized version of nature that questions the reality of the subject. Further exploring the line between hyperrealism and fantasy, the artist infuses her tableaus with elements from the contemporary notion of “cute” culture in Japan, known as kawaii, as evidenced in kitsch toy worms crawling through the settings. In the form of a floral still life, Yao creates a subtly unfolding narrative that draws the viewer from the expanded sphere of influence of Western culture to excesses produced by capitalism and modern Japanese consumerism.

Yao’s work has been exhibited in many venues including the Los Angeles County Museum of Art, REDCAT, the Museum of Jurassic Technology, the Japanese American National Museum, Orange County Museum of Art, Laguna Art Museum, Museu Brasileiro da Escultura in Brazil, and Kidang Museum in South Korea. She is a recipient of James Irvine Foundation’s Visions from the New California 2012 Award supported by the Alliance of Artist Communities.