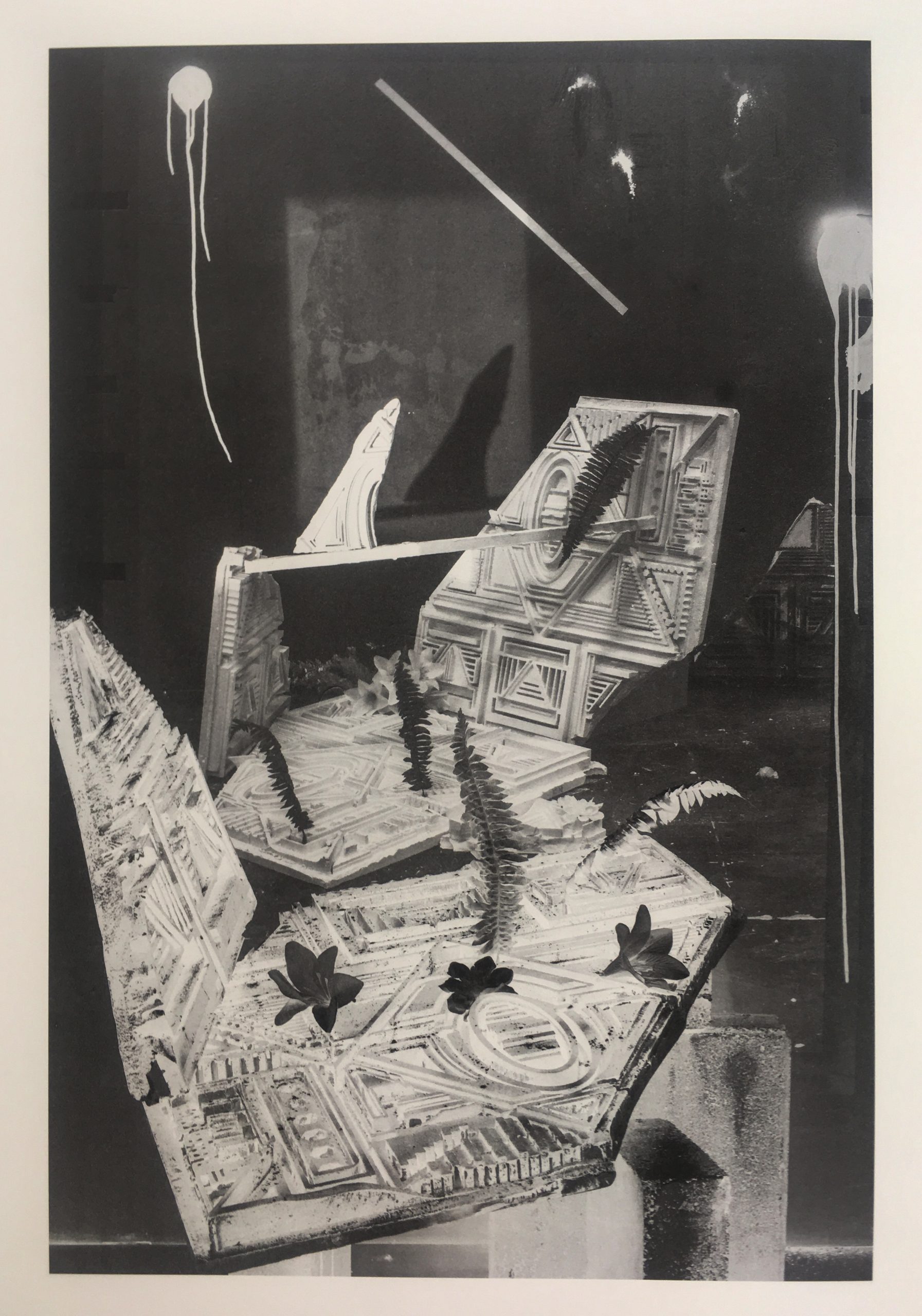 Tucked away behind glass in an unassuming storefront nestled between the Toy District and Pershing Square, just across the street from the historic Beaux-Arts Hotel Rosslyn building, is El Nopal Press. As Downtown LA has undergone incredible shifts in population and gentrification, master printer Francesco X. Siqueiros has occupied that particular location on 5th street for 16 years (though he founded the press over 30 years ago in 1990), creating experimental printmaking techniques and publishing countless fine artwork editions.

For 18th Street Arts Center’s first limited edition publication in collaboration with artist Rodrigo Valenzuela, we knew we wanted to work with a lithographer. The images Valenzuela had provided were so detailed, with lush blacks and greys in nuanced layers, that lithography just felt right. When we asked around for the best lithography in town, we got the same answer again and again: “El Nopal Press.”

Francesco, soft-spoken with a salt-and-pepper mop of hair and lilting voice, let me into the locked shop, and immediately offered me a cup of thick, strong coffee in a small cup. Rodrigo arrived soon after, tall and perpetually in motion, also wanting coffee, and dove unapologetically into the tiny packaged pastries Francesco had set out. “I love these!” he exclaimed. “Reminds me of the sweets we would have as we watched soccer games when I was growing up.”

We wove our way around the small, high-ceilinged space dominated by flat files with hand-scrawled names like “John Baldessari, Harry Gamboa, Jr., Analia Saban, Daniel J. Martinez,” and an enormous Mailänder flatbed press (affectionately dubbed “the Beast”). Francesco had later told me that he had learned how to work with flatbed presses at the storied LA print shop Cirrus Editions in the 1980s and 1990s, when they first started to be used in fine art printing rather than more commercial uses. The press he ultimately acquired for his shop used to be a commercial proofing press for printing on metal, and was later converted to be used for bespoke lithography on paper.

We settled on Animita #9 as the image for the edition, mystical imagery of a shrine-like object, with perhaps broken, perhaps oddly cantilevered architecture stamped with vaguely Aztec futurist geometric designs. The image extends deeply into the background with nuanced shadows, punctuated by dripping wounds of white paint.

Animita refers to the concept of the roadside altar, something that we see often in Los Angeles and has a symbolic language all its own. These altars memorialize someone who lost their life on the side of the road, usually due to a vehicular accident or violence of some kind. Bicycles spray-painted white and chained up to mark the spot where a cyclist perished; signage or temporary murals along with candles, plastic flowers, wreaths, toys, handwritten notes, and flags memorialize where a loved one died due to gun violence or a hit-and-run. Sometimes friends and family members maintain these memorials (Rodrigo calls them monuments) for months. Rodrigo was interested to see them in the US – they are also frequent in Chile, where he grew up, but are most often because of gun violence (something that is increasingly true here in the US). People would make little houses to continue to “animate” the spirits of those who perished on that spot.

Much of the thinking and research behind the Animita series developed for Rodrigo during his time in Texas, when he first became introduced to the concept of Confederate monuments. Though he sympathized with efforts to remove or reclaim these symbols of hate and systemic oppression, he became far more involved in the question of how we memorialize, and create public monuments for, the people we truly love. He created an installation to this effect called Sin Heroes at the David Shelton Gallery in 2016 in Houston, and pieces from the brutalist geometric stamped wall (which Rodrigo describes as “something mystical and ancient that you feel should exist, but is not actually referencing anything in particular”) are featured in the composition of Animita #9. At first glance, it almost looks like wreckage, an architectural ruin or a body broken on the ground, with violent white paint in the foreground like gunshot wounds. Lovingly placed flowers, fern fronds, and glowing lights illuminate the forms tenderly, lending monumentality and universality to the process of remembering.

Back in Francesco’s shop, as we talked about duotone printing to capture the blacks and greys, and new processes involving silver ink that Francesco is developing (he shows us some gorgeous works in progress with a bit of awe and barely contained glee), it strikes me that El Nopal is something of a shrine itself, to the love of artistic ideas, experimentation, and accessibility. After all, Francesco made the move to printmaking in response to the crass commercialization and cult of personality in the 1980s art world, preferring to publish multiples, and the loving process of experimenting with a press.

This edition, and the process of making it, felt so utterly relevant after the last two years. So much mourning, violence, and despair, and we have not even been able to really process it all together, in private, in public. So we gather on street corners, protest, light candles, create public altars, wrangle new imagery off of old presses, do whatever we can to reconnect to something larger. How can we create monuments to that which we truly love? What does that even look like in the Americas these days?

This finely crafted lithograph created by artist Rodrigo Valenzuela  and co-published by El Nopal Press is in a limited edition of 55, and all proceeds benefit 18th Street’s work supporting artists. Purchasers will also be invited to view the Center’s Virtual Gala on November 6 at 5pm, to learn more about the organization and its work. Purchase now for $350 at https://18thstreet.org/2021-artist-edition/