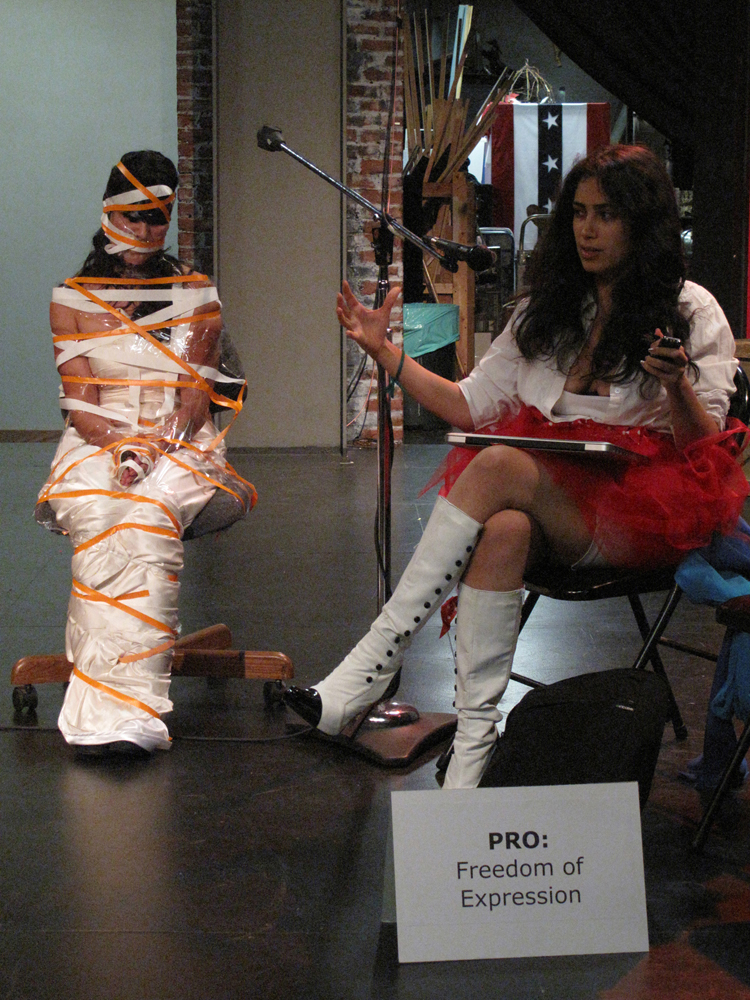 From June 3 through August, 28 in the main gallery, Artists Jerri Allyn and Inez S. Bush, with collaborating artists Juna Amano, Micol Hebron, Michele Jaquis, Carol McDowell, Marissa Mercado, Rosalyn Myles,Shana Nys Dambrot, Juliana Ostrovsky, Beth Peterson, Karl Jean Petion, Erika Reynoso, Trinidad Ruiz, Marjan Vayghan, and Erich Wise will present Debating Through the Arts: Exhibition & Performance 3, during the summer based on a model United Nations. The accompanying Exhibition features some of the creative proposals that have emerged from Debates 1 and 2. Discreet installations include sculpture, photography, video projections, interactive stations and conceptual artwork, some of which will change during the residency.

Jerri Allyn (MA, Feminist / Art and Community) creates site-oriented, interactive installations and performance art events that become a part of public life, and builds connections between various communities. Internationally exhibited, Jerri is a co-founding member of The Waitresses and Sisters of Survival, 1970s/80s performance art groups that were part of the burgeoning Feminist Art and New Genre movements. Grant funded for over 20 years, Allyn is part of the arts “legacy” in the City of Angels, the 2011 theme at 18th Street. Recently, she has focused on resolving conflicts creatively with A Chair Is… (2001-2005), and Debating Through the Arts(2009-2011), projects.

Because of Allyn’s inclination toward service, she brings the “process of creativity” to bear equally on her work as an artist, educator and administrator in cultural organizations. She produces interdisciplinary initiatives that reflect an understanding of the complex territories of collaboration, diversity and issues of social concern.

Inez S. Bush holds an M.A. in Education, Leadership, Change with a focus on sustaining arts integration into educational practices from Antioch University LA and a BFA in Graphic Design from SUNY Purchase. Bush is co-founder, CEO and Creative Director of Gramercy Partners, an award-winning communications design firm. She is a consultant to districts and schools in implementing arts education and a trained strategic planning facilitator and coach to non-profit, business, education and arts education.

Trained as a fine artist and graphic designer, Bush’s recent scholarship focuses on identifying what is preventing the sustainability of arts integrative methods into educational practices. Bush’s research is based on the premise that the arts are a conduit to a healthy society. Research indicates that individuals who study the arts develop heightened critical thinking, problem solving and collaboration skills – currently labeled “21st century skills.” And because artists are trained to look at things from various perspectives, they are often more tolerant and empathetic. Due to these enhanced skills and perspectives, both Bush and Allyn believe that artists should play a significant role in resolving issues societies are facing locally and globally.

Juna Amano
Trained at Hunter College, New York and Otis College of Art and Design, Juna works in painting, drawing, print, sculpture and community art. With a background in theatrical film, her art travels freely between high and low, between media, while tracing the mystery of everyday life. This is her first collaboration with sculptor and performance artist, Erich Wise.

Micol Hebron
Micol Hebron is also an interdisciplinary artist, represented by Jancar Gallery in Los Angeles. Hebron is a reviews writer for Art Forum.com, and an editor with X-Tra magazine. She is a member of the LA Art Girls.

Michele Jaquis
Michele Jaquis, an interdisciplinary artist and educator, has had exhibits in alternative spaces, galleries, museums, conferences and film festivals in the US, Canada, Australia and New Zealand. With an MFA in sculpture from RISD and BFA in sculpture/experimental studio with a minor in psychology from Hartford Art School/University of Hartford, she is currently Assistant Professor and Director of Interdisciplinary Studies at Otis College of Art and Design.

Carol McDowell
Carol McDowell is an interdisciplinary dance artist and scholar. Her work has been presented at the Skirball Cultural Center, Sweeney Art Gallery, Highways, The Kitchen, DTW, PS122, and abroad. Selected for a 2010 Hothouse Artist Residency at UCLA and a choreographer for Asher Hartman’s “Annie Okay” presented at the Hammer Museum by Machine Projects, McDowell is currently collaborating with Victoria Marks in her newest project, “Smallest Gesture/Grandest Frame.”

Marissa Mercado
Marissa Magdalena is a Los Angeles based artist whose practice includes a range of articulation from object making to performance.   Marissa attained her fine arts degree from Otis College of Art and Design. She also works as an arts enabler and educator. To this end Marissa has worked many area schools, The Getty Center, and Otis College’s Graduate Public Practice Program.

Rosalyn Myles
Rosalyn is a native of Los Angeles. She attended Mills College in Oakland, graduated then returned to home to work as a set decorator in videos and commercials. She was drawn back to art and attended CCAC where she received a Fine Arts Masters degree. Rosalyn is currently working on art projects in Los Angeles.

Shana Nys Dambrot
LA Canvas Arts (and Books) Editor Shana Nys Dambrot is an art critic, curator, and author based in Los Angeles. Formerly Managing Editor at Flavorpill, she is currently a regular contributor at Whitehot Magazine and the LA Weekly. Her monthly blog, Urban Scrawl, lives at Createfixate.com, and her c.v. is periodically updated at http://sndx.net.

Juliana Ostrovsky
Julianna Ostrovsky was once a refugee from Leningrad a.k.a. Saint Petersburg, Soviet Union and was adopted by the American metropolis, The New York City. She now paints and resides in Los Angeles and teaches every thing she learned in Leningrad a.k.a. Saint Petersburg, Chicago and New York to school children and their teachers and to art students of all ages.

Beth Peterson
Beth Peterson is a puppetry artist, arts educator and community arts organizer. She is the Director of Community Arts Programs for LA Commons -working with local artists and young adults to create temporary public arts projects that share the unique stories of the people of Los Angeles. She creates masks and puppets for theatrical original works performed nationally and internationally.

Erika Reynoso
Born in Los Angeles, CA. A graduate of Otis College of Art and Design, she is also an alumni associated with the first group of graduates to begin teaching within the Artist, Community, and Teaching Program. Her practice is currently based in Los Angeles, with an emphasis on works founded in sound and video installation.

Trinidad Ruiz
As an artist Ruiz has worked in California arts institutions and museums for over 13 years including the education departments of the Fowler Museum and The Hammer and as Assistant Curator at the Torrance Art Museum. He was Public Programs Coordinator at Otis College and is Administrator and Programs Manager at the Watts House Project. Ruiz holds an AA in Studio Art and a BA in Art History at UCLA.

Marjan Vayghan
Born to Azerbaijani parents in Tehran, Iran in 1984, Marjan Vayghan emigrated to the United States in the Spring of 1995, settling with her family in LosAngeles, California. Vayghan continues to live alternately between Teheran and LosAngeles. her practice is informed by this context of movement and flexible citizenship across both geographical and cultural spaces, and the multiple realities these spaces engender.