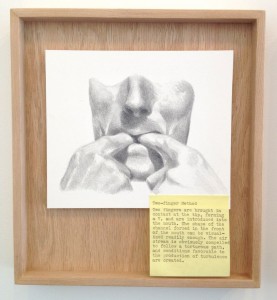 Prospecting Notes About Sounds consists of notes that led to the production of the LP Whistling and Language Transfiguration, which uses the tonal qualities of the Zapotec language to translate stories of the Tlacolula Valley in Oaxaca into its whistled form.

Porras-Kim makes work that questions how knowledge is acquired, tests the potential of the art object to function as an epistemological tool outside of its traditional, art historical context, and challenges the possibilities and limits of learning about the cultures that surround us. Her work can be perceived as both aesthetic and utilitarian, capable of serving as a means for an outsider to access information about an unfamiliar culture.

The exhibition will include objects that were part of the research of Zapotec culture and politics, its tonal language and the variations of dialects contained within this region, and whistling used as the hidden transcript, as a strategy of dissent.

Gala Porras-Kim was born in Bogotá, Colombia and lives and works in Los Angeles. She received her BA from UCLA (2007), MFA from the California Institute of the Arts (2009), and attended the Skowhegan School of Painting and Sculpture (2010). Her work has been included in exhibitions at Commonwealth and Council, Los Angeles; Vincent Price Art Museum, Monterey Park, CA; La Central, Bogotá, Colombia; FOXRIVER, Singapore and Dobaebacsa HQ, Seoul, Korea.