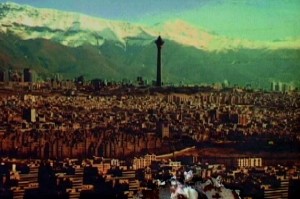 In the main gallery we are proud to present a provocative and groundbreaking exhibit, Postcards from Tehran, a collaboration with the Aaran Gallery of Tehran, Iran, curated by Nazilla Noebashari. The show breaks down the barriers of political prejudice to exhibit for the first time in Los Angeles the work of 7 Iranian artists, and 2 artists from California who migrated from Iran. Both social commentary and a poetical discourse of Persian culture, Postcards from Tehran represents unique viewpoint of contemporary artists from Iran whose dissenting viewpoints will be a revelation to a national American public whose main knowledge about Iran is derived from corporate cable news channels. The artists include Arash Fayez,  Siamak Filizadeh, Hadi Nasiri,  Behrang Samadzadeghan,  and Jinoos Taghizadeh. They are joined by Iran American artists Ala Ebtekar and Amitis Motevalli, both well known West Coast visual artists.

Ala Ebtekar was born in Berkley, California. He received his BFA from the San Francisco Arts Institute, CA and his MFA from Stanford University, CA. In addition to a decade-long run of solo exhibitions, Ebtekar’s work has been featured at galleries such as Whatcom Museum, Bellingham, WA; Waterhouse & Dodd, London, UK; The Third Line, Doha, UAE; Yerba Buena Center for the Arts, San Francisco, CA; ordiska Akvarellmuseet, Skarhamn, Sweden and the Chelsea Art Museum, New York, NY. Ala Ebtekar is as much influenced by the mythology and folklore of his Iranian heritage as he is by the legends and lore of hip-hop culture. Ebtekar was featured in a touring exhibition originating at the Asia Society in New York; and in the 2006 California Biennial at the Orange County Museum of Art. Also in 2006, Ebtekar was awarded the Stanford University Paris Studio residency, 2008 marked a residence at the San Francisco Center for the Book, and 2009 he received the Visions from the New California Award.

Arash Fayez is a young photographer who is very respected in Iran. The series in this exhibition are titled “ Memories” in 3 episodes and are Polaroid images. The series are evolving around childhood memories. The third set “Decadence of Memories” is photographed against the backdrop of the city and particularly the mosque. It’s sort of a metaphor for what is happening behind our realm of control, the influence of the system behind our walls. In a country where minimum is done to preserve our national heritage, our memories are bound to loose consequence. It’s therefore no surprise that the younger generation are loosing contact with the past, most prefer to ignore it completely.

His work was last seen At Chelsea Museum in N.Y. An entire 11-meter wall was dedicated to this series “ Rostam2- Return”. Based on Shahnameh and bringing the Super Hero of Persians to 21st Century, the artist successfully critiques a nation and it’s preoccupations with consumerism, kitsch culture and taste, resulting from mass immigration from villages and towns in the Mega city of Tehran.

Amitis Motevalli was born in Tehran, Iran and moved to the US in 1977. In 1995 she received a BA from SFSU in Art with a minor in Women’s studies and in 1998 an MFA from Claremont Graduate University. Her work as an artist incorporates a combination of near-eastern aesthetic with a western art education. Motevalli states, “Being an immigrant in the US shows in my work a duality of culture, both natural and learned. In all of my work, I create a dialogue that critiques dominant views of oppressed people and culture in general”. Her work in art education is with youth who share a similar duality in vision. Motevalli has been active in creating social change with her students on issues of civil rights within the class through pedagogy or working with students and community to organize around issues that effect their quality of life and access to education. Amitis Motevalli is a recipient of the California Community Foundation Fellowship and the Visions of California Award. She currently lives and works in Los Angeles, exhibiting art nationally and abroad as well as organizing to create an active and resistant cultural discourse through information exchange, either in art, pedagogy or organizing artist and educators.

This artist’s work is rarely shown out of the country. He is quite well known for his daring performance projects in Iran and outside. One of his projects that was very well received in Tehran few months ago, was distributing “Nazr” (offerings of food in special religious occasions) where instead of writing the usual Names of Emams/ Saints and religious propaganda, the slogans of green movement were written on the “Nazri Food” and distributed around the city Political Prisoners

His work has been shown in a number of international exhibitions, also at Chelsea Museum in N.Y. He is a multi-media artist and successful painter. The video “Lost in Highway 2” is part of a series about City of Tehran and it’s complexities. The video shows a man (probably a concierge in a building) who takes a stroll in the city. The artist has observed this man’s outings for few months and his walks always turn to a sort of dance. The man walks the street and dances as if he does not have a care in the world.

A renowned artist whose work has been successfully shown at Biennale of Istanbul in 2009 and Biennale of Thessaloniki in 2009. As well as Chelsea Museum video titled “ Fatness”. The video shows a cake which depicts city of Tehran, and the artist while eating the cake is narrating how she has gained 30 kgs in the last one year, referring to the events after the rigging of elections in 2009. The duration of the video is 20 minutes and what is NOT said is more obvious than what is being said. Artist follows in footsteps of artists poets and intellectuals of Iran whom for centuries have had to censor their own works, sarcasm and humor being integral parts of this self-defense mechanism

With intellectual confidence, Golshiri embeds a wealth of references – literary, bodily, philosophical, autobiographical, historical, political – into his works entrusting the audience to decipher not only what can be seen in the artist’s pieces, but also what has been injected between the proverbial lines. In his home country, Golshiri has acquired a reputation, constantly walking a very fine line between the expectations of an audience for critical commentary and the need to maintain an art practice and livelihood granted by the authorities. He adapts this condition pro-actively and turns it into a conceptual approach that seems free of fear – even playful – and saturated with a deep sense of political urgency as well as humor.

The fact that a video is fitted in to a wallet by itself is a wonder .To turn an everyday object in to a vessel of art is amazing. The Tower of Liberty , builtduring Shah’s time to become a symbol of Tehran is towering over a city that is chaotic, mad and energetic. A city that we all love to hate but also can’t stay away from it. The city and the tower as a magnet that has drawn people from all over the country in pursuit of better life and more freedom. The Tower of Liberty of Tehran has been a silent witness to struggles of a Nation that has lived through years of chaos, uncertainty and hope.

Thousands of years of Iranian history record many achievements of world significance. It is in artistic creations; poetry, architecture and fine arts that Iran expresses her essential character, and this many believe, constitutes her most precious legacy. Enduring all vicissitudes of history, even the most severe, Persians have always been loyal to the ideal of beauty and perfection and found therein not only the redeeming answer to brutality, chaos and frustration but also a consolation, a sanctuary, and thereby delight and revelation.

Art was an essential element in the first civilizations that emerged on the Iranian plateau more than six thousand years ago and it played a vital role in all subsequent ages, maintaining throughout a well defined individuality. All that was made, was spontaneously beautified: Gardens and buildings, pottery, carpets, books, weapons, costumes, furniture. In short wherever there was a material that could be made beautiful, colors that could be arranged, a substance that could carry a pattern, the Persians found a field for the play of their imagination and taste.

There is continuity to be found in Iranian art , a persistent and self renewing quality, providing it with the kind of unity in variety that we associate with a living being. The Iranian spirit is a tenacious one. No historical shock, however drastic has been able to break the chain. Interruptions there were , yet they always permitted even provoked a resumption. Ideas, styles, techniques were accepted but they were only elements to be adjusted to the established Iranian practice, sooner or later to be absorbed in to it.

The Persian legacy has endured, beyond Iran’s geographical borders ( Frontier ) thought not overtly expressed , even when the voices of our poets were silenced and arts were suspended or suppressed, the current flowed on in the depths. Destined to flame again when conditions favoured and genius summoned. Each revival has been a resumption of concepts that have persisted through repeated renewals. On twenty first of March every year for thousands of years we have celebrated the renewal of the year, a complete circle around the sun, a total rebirth.

In the cradle of mysticism, we are pre- disposed to mysticisms, but not the dark kind, but of light and truth. Light; intense, palpable, substantial, ever present, is an integral part of our way of thinking and feeling, a recurrent theme in our poetry, religions and arts. Only beautiful could be adequate in communicating with the true and the good, the indivisible facets of one experience.

Drama, romance, exquisite sensibility, and ecstasy along with a strong tendency towards story telling, are integral parts of Persian arts. The same canons of lucidity, precision, design, narration and rhythm are revealed in our poetry and music.

In Persian painting for instance , representation takes the back seat to beauty of pattern and form, brilliance of detail, jewel like colors, and mystical visions. Thefantastical world created by our artists; bright unearthly landscapes of a fairyland where the heavens are vivaciously blue and animals coexist with humans, where the first man who was an Iranian king rules and the prowess of various early heroes magnifies our race and assures us of our legacy. An abstractness that permits a presentation to take on a timeless character, recalling the past , expressing hope for

future, affirming everlasting values and always absorbed in glory of light. For many centuries aesthetic impulses of Iranian artists created a close interrelations ofthe various arts, a natural and organic connection. Many mastered perfection in a number of medias, all connoisseurs of beauty in many forms , contributing to therichness and originality of invention in all fields. The main objective appears to have been the development and harmony of all that is excellent in human nature. The whole universe seems to have been conceived as an aesthetic whole in which every part is good, true and beautiful.

In Iran today, the artists in general respect and honor their predecessors and perpetuate their work as conscientiously as the conditions permit. They are bonded to our land and it’s destiny. Isolation is not permitted, work has to go on despite scarcities, limitations and controls. They carry on in the same way that their ancestors have done for centuries, constantly aware of the legacy of a nation that has endured more than it’s share . Perhaps it’s this anonymity and humility, this level of social responsibility and integrity that has been the source of the merit of Persian arts and it’s limitless potentiality.

Today in midst of another difficult period of our history, there are signs that we can once again complete the triad; the true, the beautiful, the good .

Persians are to prevail yet again.