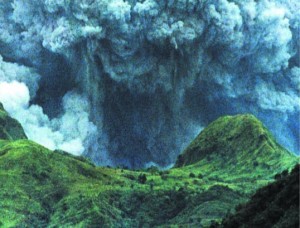 Perpetual Peace was produced over a four-year period (2008-12) during which the artist, Michelle Dizon, traveled throughout the Philippines researching sites impacted by neocolonial and neoliberal policy.  The subjects Dizon documented include the ruins of the former US military bases, the extraction of natural resources by multinational corporations, the development projects of US AID, the conflict zones of the southern Philippine island of Mindanao, and the camps for those displaced by war and disaster.  Her footage maps a Philippines that remains deeply affected by the legacies of multiple colonialisms and its continuity in international governing agencies of the globalized present.

Working in the intervals between languages, histories, geographies, economies, and generations, Dizon navigates the link between subjectivity and temporality, and the struggles within political history for an equitable future.  Perpetual Peace, presented here as an eight-channel installation, asks how history might be retold through the perspective of the postcolonial diaspora.  Structured between immersive and perpetually looping projected images, tightly edited intervals, a composed soundtrack, and a written script, the installation invites the viewer into a fragmented cinematic experience where they must piece together the elements of image, sound, and text.

Perpetual Peace is part of 18th Street Arts Center’s Artist Labs, a process-based exhibition and residency program inviting artists to use the center’s main gallery as an ongoing open studio for the development of new work. This project progressed on-site for a month leading up to the opening, allowing for exploration and dialogue. This working methodology paired with investigatory programming allows for a dynamic unfolding of the artist’s concepts throughout the course of the installation.

An artist, filmmaker, and writer, Michelle Dizon, was born and raised in Los Angeles as part of the Philippine diaspora.  Her video installations, films, and writing focus on subjectivity as it intersects with the histories of colonialism and its legacies of immigration, diaspora, and globalization.  Currently, she is at work on a feature-length film and large-scale installation entitled Perpetual Peace that addresses US imperialism, militarization, globalization, and war in the Philippines.  She is also revising a book entitled Vision in Ruins that explores visuality in an era of neoliberal globalization.

Dizon is the incoming Co-Chair of the Visual Art Program at the Vermont College of Fine Arts and Visiting Faculty in the Photography and Media Program at the California Institute of the Arts.  She earned an MFA in Art with emphasis in Interdisciplinary Studio from the University of California, Los Angeles, and a Ph.D. in Rhetoric with designated emphases in Film and Women, Gender, and Sexuality from the University of California, Berkeley.  She lives and works between Los Angeles, California and Davao City, Mindanao.