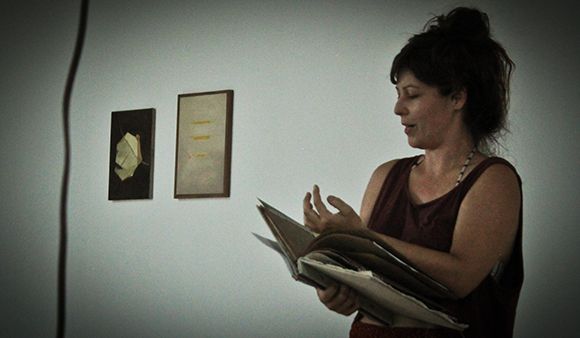 Patricia Fernández’ “Points of Departure (Between Spain and France)” considers the forms that history takes in the context of war, displacement, and political persecution that has reshaped our notions of geography and place over the past century. Fernández’ work is on view through June 27 as part of 18th Street Arts Center’s Artist Lab Residency, a three-month studio residency for which Los Angeles-based artists are invited to develop projects that make their working processes transparent for the benefit of a visiting public.

As the descendant of political dissidents in Fascist Spain, Fernández was born in 1980 into a newly liberated country still reckoning with the legacy of Franco’s dictatorship. Upon returning to Spain as an adult, she became intrigued by the materials, some commonplace, that represented an otherwise lost historical record of dissent, struggle, and displacement. After meeting a family friend, an anarchist who had fled the country but later returned, she began to trace the paths that Spanish Republicans had taken through the Pyrenees to escape persecution in 1939, known as la Retirada. Hiking the trails is an act of endurance that allows her to physically synthesize the actions and the memories of the survivors whose stories she articulates through her body of work. These walks produce drawings and texts, inspired by conversations with nonagenarian Spanish expatriates still living in France, which Fernández renders as a historical archive of their displacement. Through actions — walking, painting, hand-copying maps and documents, presenting slide lectures about materials from the archive – she absorbs history and reproduces it as a living, contemporary force.