Dripping stripes of red, orange, yellow, green, blue, indigo, and violet add vivid color to artist Naufus Ramirez-Figueroa’s arched and nude body. In this performance called “Rainbow Action” (2011), the artist uses a pure and joyous symbol, the rainbow, to represent the utopian, Leftist dreams that were once a part of his childhood. Underneath these dreams is the reality of a civil war that has shaped his home country of Guatemala since before his birth until today. Through performances like these and much installation work, the artist portrays the complexity of his experience during the war, and in particular his life as a child refugee in Canada. By drawing on color, humor, and fantasy, Ramirez-Figueroa is contributing to a very present national conversation about the social and political consequences of the decades-long war between 1960-1996. 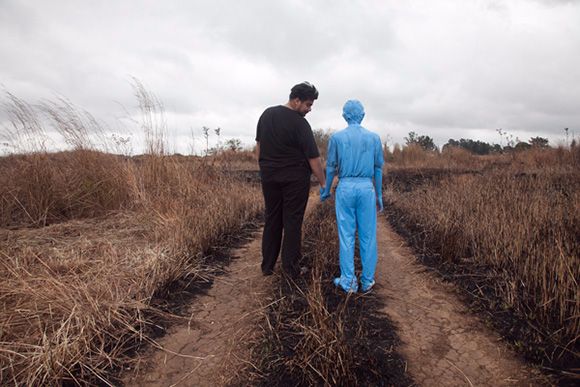 The artist is completing a two-month residency at 18th Street, which will serve as the initial research phase for a later commission to be featured in a joint exhibition between 18th Street and LACMA. The exhibition, “A Universal History of Infamy,” curated by LACMA’s Pilar Tompkins Rivas, Rita Gonzalez, and José Luis Blondet, is a project of Pacific Standard Time: LA/LA, an initiative of the Getty with arts institutions across Southern California.

For Pacific Standard Time, the artist is returning to his early exposure to experimental theatre in 1970s Guatemala, in which his own uncles were involved as art students, when he was just a child. Ramirez-Figueroa says that the theatre “had recognition amongst other Latin American countries at that point” and he’s interested in learning what happened and bringing attention to its history, in part because of its violent repression by the state. “I am interested in why a society or government would use violence to repress art when to me it seems a very exaggerated reaction,” he says. “But of course, we know it’s not an isolated instance.” Ramirez-Figueroa acknowledges the political and artist movements that were being repressed across the continent during this era. The artist was enthusiastic for the possibility to do some of this research in Los Angeles, a place that has been important for many Latin Americans, including Central Americans. He acknowledges his limited knowledge of the city and how he’s encountering it with some hesitation. “I do have a lot of misunderstandings and a lot of trepidation around this city, because within the larger narrative of Central America, it’s a place that has not been that easy.” This history of Central Americans fleeing war to come to Los Angeles, in addition to the birth, in this city, of the most violent gangs that plague Central America today, are not facts he takes lightly. “For Central Americans, L.A. is not exactly a place that is known for great opportunities, since so many of us came with so much stress, and had a hard time getting here, and also with the history of gangs, and that back and forth,” Ramirez-Figueroa says. 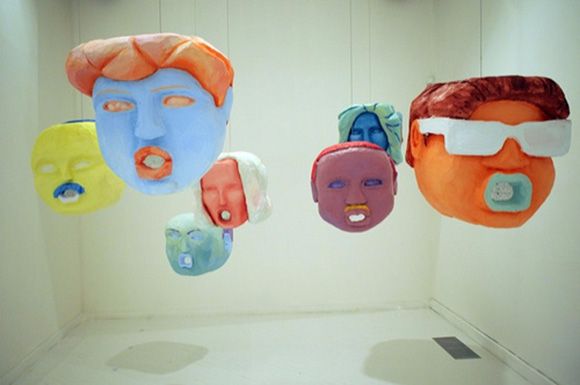 While Ramirez-Figueroa and members of his family were not granted refugee status in Los Angeles, the path of seeking sanctuary is one he understands well and has explored in several projects. In “Props for Eréndira” (2014), a project presented at the Gwangju Biennale, he created a series of Styrofoam objects with a freezer-burned appearance to tell about his relationship to loss — both as refugee and more recently when his family’s home in Vancouver was accidentally burned down. Ramirez-Figueroa lost all his artworks and archives stored there. The experience reminded him of a film he watched repeatedly as a child, one of the few Spanish language films available in Vancouver when he arrived with his grandmother and uncle. The film “Eréndira” tells the story of a young woman who is forced to prostitute herself to repay the costs of accidentally burning down the home of her grandmother. “It was one of the first movies we saw on our journey, ” he says. The story of prostitution also resonated with his experience seeking refugee status in multiple countries before being granted asylum in Canada. “Even though my grandmother never prostituted me, I think this process of going to Mexico, then going to Canada, was a type of prostitution. We would just bare all of our misery for some part of the government, or even international law so that they would allow us to live in their country.” After his family’s home was gone in Vancouver, Ramirez-Figueroa did not see much reason to return, largely because he never felt fully welcome there. “I think when I was in Canada, people had a bit of a hang-up that I wasn’t Canadian. I think I always minded that. I guess I always minded being seen as a refugee.”

Being viewed as an outsider meant his experience in Canada was colored in part by figuring out what it meant to live there, what it meant to be Canadian. “The process of becoming Canadian and accepting the symbols of Canadian-ness,” were a recurring part of growing up, the artist says. He created a series of works, which he showed in Guatemala as an opportunity to tell his story to other Guatemalans. “There’s a history in my family of being exiled and coming back, and I never felt like that was a problem, and since over a million Guatemalans left during the war, I felt that there was a value in my voice,” Ramirez-Figueroa says. The artist created an installation that featured “Potatoes and Elk on an Imitation Persian Rug” (2010), a rug whose center was made of potatoes and toy moose inspired by memories of the food they had access to as refugees in Canada. “I grew up with my grandmother and we didn’t have much money. She sometimes worked as a maid. We’d sometimes get food from a food bank, and it would be potatoes with little buds, and sometimes they would grow more buds, and to me they looked like little elk or moose antlers,” he says. His imagination as a child presents a side of his experience as a refugee not simply imbued with stories of misery and poverty, but instead speaking to the resources that a child calls upon to survive emotionally. The idea for the installation was that the potatoes transformed during the course of the exhibition, growing more and more buds, blending in with the toy moose, just as Ramirez-Figueroa had once fantasized as child.

In this work along with others, Ramirez-Figueroa is contributing to conversations between Guatemalans about the civil war, a collective experience that is hard to process or understand, only two decades following its end. With a project that is both a video and a photo — the former “Abstracción Azul,” or “Blue Abstraction” and the latter, “Fantasma Amigable,” or “Friendly Ghost” (2012) — Ramirez-Figueroa literally and figuratively adds color to an aesthetic conversation about the war that has been very “black and white.” He describes how the dialogue around the war often labels one or the other side evil, without looking at the gray areas, including the different ways that people deal with trauma. “People who have gone through very traumatic things usually don’t have this black and white way to see things. I mean there is a lot of humor involved,” he says. The photograph shows a dried up field under a gray sky, and Ramirez-Figueroa holding the hand of a friend, who appears, painted a fluorescent blue, in the video. The friend represents his uncle who was murdered when Ramirez-Figueroa was only 6, the year that he first left Guatemala. The artist says that he literally highlighted his friend by painting his body, to talk about how trauma works. “Trauma is something that doesn’t fit into the narrative of your life, it stands out, and how the thing stands out, I expressed it through the neon blue.” By adding a vibrant blue to a landscape heavy with violence and loss, the artist is asking whether there is room for other ways to process grief that go beyond placing blame. Ultimately, Ramirez-Figueroa felt the project was successful because it broadened how people could talk about their experience in the war, not necessarily taking one side or another, but allowing for a plurality of experiences and responses. He says, “I want to be clear where I am coming from and about my experience during the war. I don’t know if where I came from is good or not, but I think it’s good to keep this dialogue alive.” 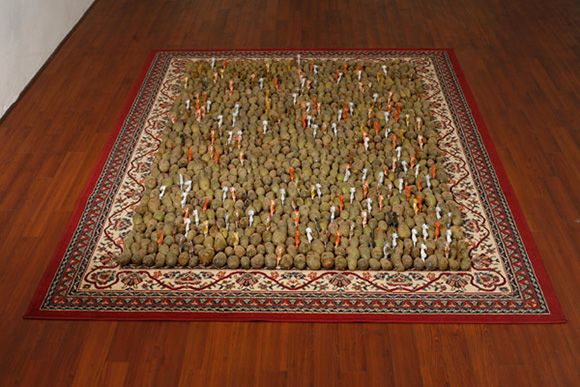 Ramirez-Figueroa’s actual and metaphorical use of color as a means to broaden conversation is especially present in the exhibition “Beber y Leer el Arco Iris,” or “Drink and Read the Rainbow” (2011) at Casa América in Madrid, where he performed “Rainbow Action.” The exhibition included an installation featuring the heads of 9 Latin American thinkers suspended in the air, multi-colored fruit drinks traditional to Latin America, and this performance, which was also inspired by another artist’s work: Cezary Bodzianowski’s “Rainbow” (1995). In a photograph of his performance, Bodzianowski is painted like a rainbow and is plunging himself into a toilet bowl, which Ramirez-Figueroa says references a disillusionment with socialism in that artist’s native Poland. For Ramirez-Figueroa, the rainbow represents ideas of “uncontained naiveté about possibilities” for the Left, which he experienced as a child. “Beber y Leer el Arco Iris” is a reflection of his experience growing up, learning left-wing propaganda but also ingesting the same Western cartoons and characters that children across the globe were being fed. “In the context of my childhood, I would hear all these stories about how the future could be different if we had left-wing governments, but at the same time I was consuming the ‘Care Bears’ cartoons, and ‘My Little Pony’, and so to me these things were melded together.” For the project, Ramirez-Figueroa also did research on how the idea of color has come into left-wing literature, and looked at the work of Carlos Pellicer, a modernist Mexican poet. “Pellicer has a poem where he talks about how awful it is to live in Latin America, because you know that everything is messed up socially, and that things should change, but when you go out into the street, you’re totally overwhelmed by all of the color, which makes you forget about all those things,” he says. Ramirez-Figueroa admits to being “a little critical of the propaganda, of the artificialness of some of these Leftist projects back then” and saw the project as an opportunity “to reassess what this whole thing was about.” By physically painting the rainbow onto his body, arching for about 2 minutes, and then using the paint on his body to stamp the rainbow shape onto the gallery wall, the artist is questioning the existence of a single political answer to the problems that afflict Latin America, but also expressing a willingness to stay connected to those possibilities, however unstable they are.

When speaking about his home in Guatemala City, Ramirez-Figueroa mentions that it has recently been voted one the most violent and ugly cities in the world. Ironically, Guatemala was also recently surveyed be one of the happiest countries, with the majority of the other top 10 countries also in Latin America. This speaks to the unique optimism that Ramirez-Figueroa connects to working in the region, but likely also to the myriad and contradictory layers that describe that place and its history, layers he continues to represent and recontexualize in his own work. For the time being, his residency in LA has provided him with a welcoming place to work until he returns.

This residency is supported by the Getty Foundation as part of Pacific Standard Time: LA/LA, a far-reaching and ambitious exploration of Latin American and Latino art in dialogue with Los Angeles taking place across Southern California from September 2017 through January 2018.