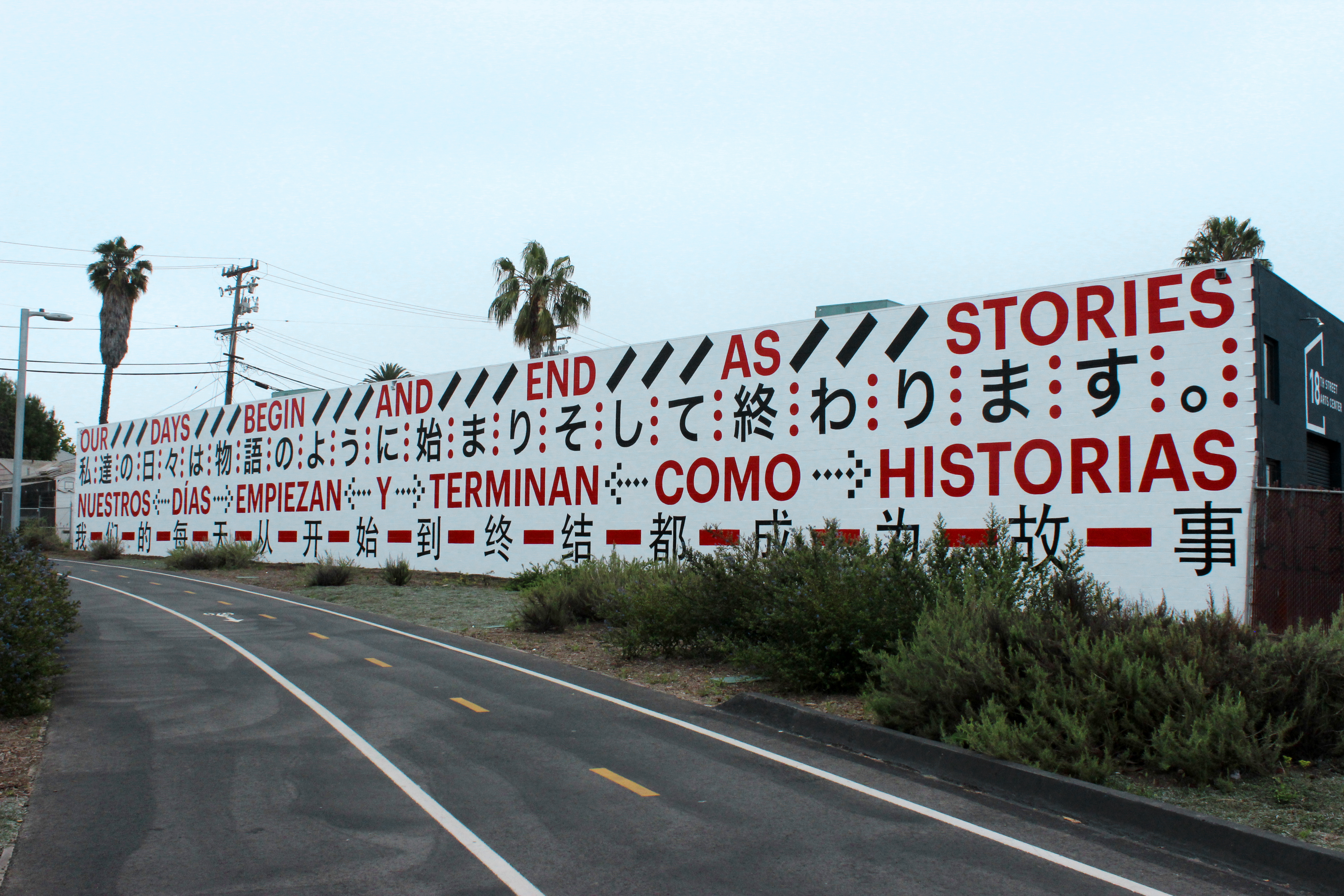 Picnic and conversation with the artist

We invite you to join us in launching a monumental mural by artist Brendan Fernandes along the Expo Line Metro corridor near the 17th/SMC station. The work is composed of a phrase culled from interviews conducted for our neighborhood Culture Mapping 90404 oral history project in four different languages. The work is a part of I’M DOWN, a series of participatory public actions in March that used performance and language to illustrate narratives of absence and loss around displacement through migration, gentrification, and social violence. Fernandes has, through performances involving movements drawing from dance, protest, and street theater, conveyed the dynamic nature of identity and relation, and critiqued the isolated manner in which we move through space in our every-day. The mural pushes us to insert back into the urban landscape the words, languages, bodies, and choreographies of people who have been forgotten or remain unheard. Come join us in welcoming the mural the neighborhood with a celebratory picnic and conversation with the artist.

Brendan Fernandes’s dance-based practice explores intersections of language, architecture, and the body. At 18th Street, he will create a series of situational performances connected to the dancer’s experience of the dance floor as a space of agency. Performers and participants will respond through movement to various locations including a site-specific installation on 18th Street’s campus, the Expo Line Metro corridor, and the adjacent bike and pedestrian path. Considering collective experiences of trauma from exile into diaspora to the attack on Orlando’s PULSE nightclub, Fernandes links the contemporary search for queer self-determination and civil rights to historical moments and sites related to the AIDS crisis still felt by survivors within and beyond those communities.

Brendan Fernandes is a Canadian artist of Kenyan and Indian descent. He completed the Independent Study Program of the Whitney Museum of American Art (2007) and earned his MFA (2005) from the University of Western Ontario and his BFA (2002) from York University in Canada. He has exhibited internationally and nationally including exhibitions at the Guggenheim, Bergen Kunsthall, Stedelijk Museum, Sculpture Centre, Manif d’Art: The Quebec City Biennial, The Third Guanghou Triennial and the Western New York Biennial through the Albright-Knox Art Gallery. Fernandes has been awarded many highly regarded residencies around the world, including the Canada Council for the Arts International Residency in Trinidad and Tobago (2006), The Lower Manhattan Cultural Council’s Work Space (2008), Swing Space (2009) and Process Space (2014) programs. He has also received invitations to the Gyeonggi Creation Centre at the Gyeonggi Museum of Modern Art, Korea (2009) and ZKM, Karlsruhe, Germany (2011). Brendan Fernandes is represented by Monique Meloche Gallery in Chicago.