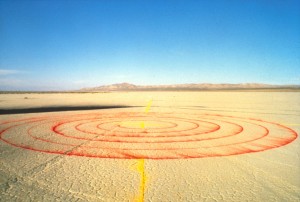 This large-scale art performance will take place at the breathtaking Baldwin Hills Scenic Overlook in Culver City, in conjunction with the Pacific Standard Time Performance and Public Art Festival organized by Glenn Phillips of the Getty Research Institute and Lauri Firstenberg of LAXART.

Spine of the Earth was originally created on the El Mirage Dry Lake bed in the Mojave Desert of California in the fall of 1980. It was a transient pigment-based land work that commenced with a performance by Long Beach State University art students who laid red, yellow and black pigment on the desert floor. Albuquerque used the Earth as a two-dimensional drawing surface with a spiraling geometric pattern that was over six hundred feet in diameter. The final piece could only be seen in its entirety from hundreds of feet in the air.

For Spine Of The Earth 2012, Albuquerque is re-imaging her seminal project from 1980 in an entirely new context with an innovative component of suspense that emphasizes the spectral line connecting the Earth’s core to the sky above.  At 12:00 pm, over 500 people participating in this performance will reveal the surprise to spectators watching at the base of the hill with choreography by LA based choreographers Wife. Attendees to this phenomenal event are guaranteed to walk away with an unprecedented art experience.

To sign up to participate in the performance, volunteers should visit: http://www.spineoftheearth2012.com/

Lita Albuquerque is an internationally renowned installation, environmental artist, painter and sculptor. She has developed a visual language that brings the realities of time and space to a human scale in ways that are simultaneously ancient and futuristic. For decades she has created large scale ephemeral pigment pieces in desert sites including the Pyramids of Giza and more recently the ice desert of Antarctica where she led an expedition and team of scientists and artists that culminated in the first and largest ephemeral art work created on the continent. Often best seen from space, Albuquerque’s work challenges perspective, and the perpetually shifting relationships between bodies in space.

Her paintings are a materialization of the ideas about color, light and perception first created in her ephemeral works. Through her use of pure pigments, gold leaf and copper, she engages perceptual and alchemical shifts in the viewing subject.  Her work was recently seen at MOCA in The Artist’s Museum exhibition and was featured in Art Paris 2011. Her solo show 287 Steps opens on January 21st, the night before her large scale ephemeral work Spine of the Earth 2012 is performed in conjunction with the Getty Museum’s Pacific Standard Time Performance Festival. 287 Steps features a new body of work and will be on view at Craig Krull Gallery in Bergamot Station through February 25th, 2012.

Albuquerque is the recipient of numerous honors and awards including three National Endowment for the Arts, the Cairo Biennale Prize and a National Science Foundation Artist Grant.  Albuquerque’s work is included in collections at the Whitney Museum of Art, the Museum of Contemporary Art, the Getty Trust, and The Los Angeles County Museum, among others. She has been a Professor on the Core Faculty in the Fine Art Graduate Program at Art Center College of Design for over twenty years.

18th Street Arts Center supports the work of outstanding individual artists and fosters the public’s engagement with a broad spectrum of approaches to contemporary ideas that reflect the cultural richness of the region. With 5 studio buildings in Santa Monica, 18th Street provides a hub for contemporary art through two program areas that reflect its mission: 1) A Residency Program that fosters inter-cultural collaboration and dialogue and 2) A Public Events and Presenting Program that focuses on engaging the public and revealing the art-making process to them through exhibitions, events, publications and other opportunities.   Gallery hours are Monday – Friday 11am-6pm.

For more information on Lita Albuquerque’s Spine of the Earth performance visit: www.18thstreet.org or http://pacificstandardtimefestival.org/

Los Angeles was a key international birthplace of performance art.  Engaging the innovative spirit of that period and LA’s vibrant contemporary art scene, the Performance and Public Art Festival will transform Southern California over eleven days (January 19-29, 2012) during Pacific Standard Time: Art in L.A. 1945-1980. Featuring more than 30 major performances and large-scale outdoor projects, the festival will include new commissions, reinventions, and restagings inspired by the radical and trailblazing public and performance works that were created by artists during the Pacific Standard Time era. Performances and projects will be located at institutions and sites throughout Southern California, in close proximity to more than two dozen Pacific Standard Time exhibitions. The festival is organized by the Getty Research Institute and LA><ART; support is provided by the Getty Foundation.