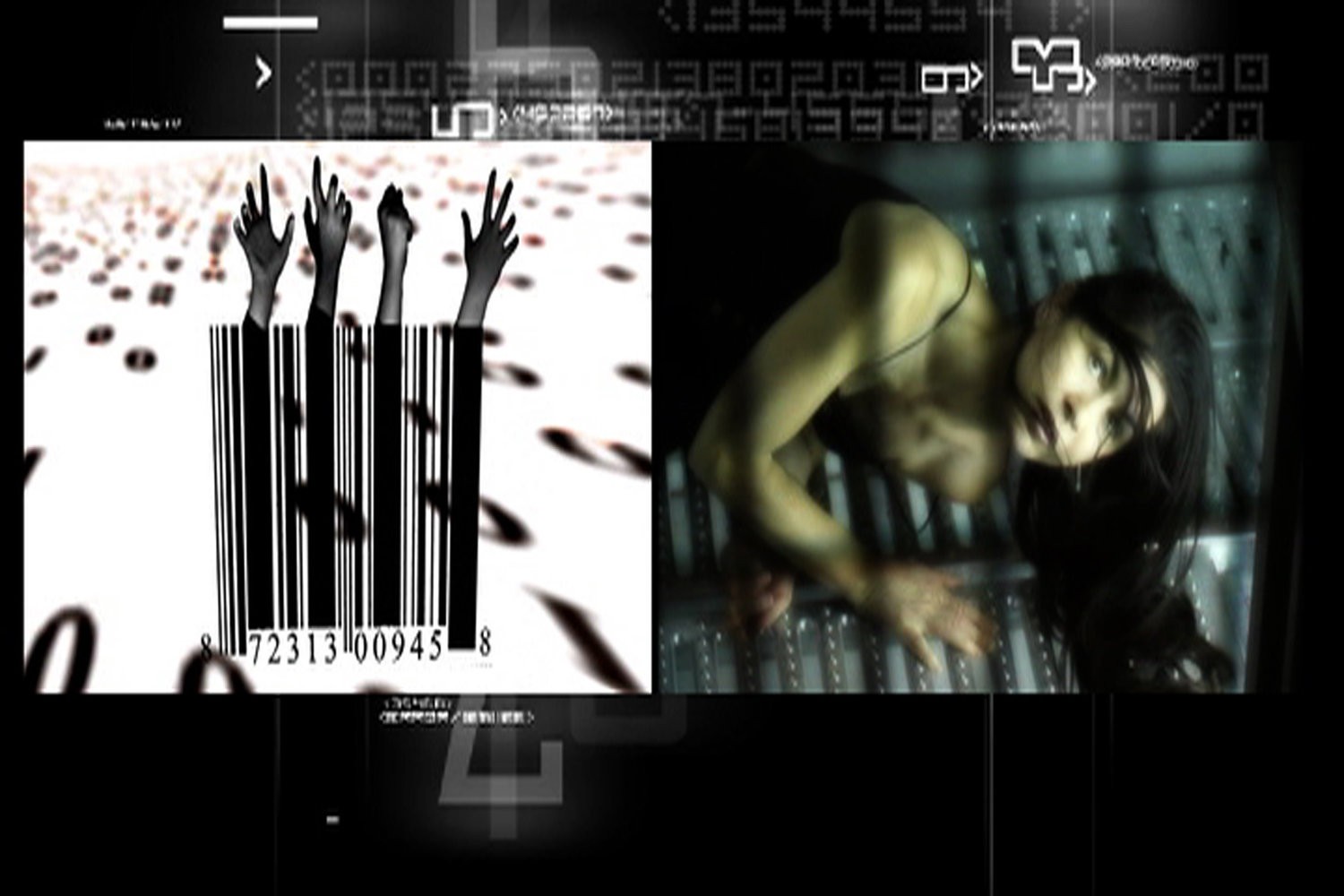 “I have always been deeply interested in ideas about perception and states of mind and have
explored them through the marriage of nature and technology.”
-Kate Johnson, as published in the Archives of SIGGRAPH, 2003.

“I soon realized that we are remembered by our tools.”
-from “Core” Artist statement (2014)

“To finish this ritual, I declare my resolution: To live and love fully and to commit all of my life fully.”
-from an email to a friend 2019

Gala Opening for Pacific Standard Time, Johnson’s video projected onto all 5 buildings of the Getty Center (2011)

Kate Johnson was a hyphenate, an exemplar of the evolution of the new creative class of the 21st Century. An Emmy-Award winning filmmaker, as an artist she created internationally exhibited and critically acclaimed works in a variety of media and genres, exploring the nexus and logical synchronicities between art, anthropology, technology and social justice. For Johnson, boundaries were illusions, invented to keep all the rich diversity of thought apart.

She was among a handful of women in the world who have created and worked in large-scale site-specific digital projection, creating massive original projections which graced iconic places such as the Getty Center, LA City Hall, West Hollywood Park & Japan American Cultural Center. Her projections were also been presented in dance and music concerts, and live theater. 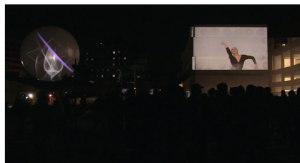 She began her experimentation with massive-format imagery in the early 2000s, with her collaborations with celebrated choreographer Lorretta Livingston.

Johnson had the heart and soul of an artist combined with the mind and hands of an engineer, writing the film scripts as well as computer code for many of her projects. She wrote, directed, shot, animated, edited, coded and produced original video art works, and often accompanied her videos with her own original music and sound design compositions.

But concurrently, she welcomed the creative ‘give & take’ of true collaborations, working with world-class artists in a variety of media, ranging from her 20-year collaboration with legendary performance artist Barbara T. Smith, to editing the multi award-winning documentary “The Healing Passage: Voices From the Water” by S. Pearl Sharp, in which prominent cultural artists address the present-day residuals of the trans-Atlantic slave trade… (More info here.) 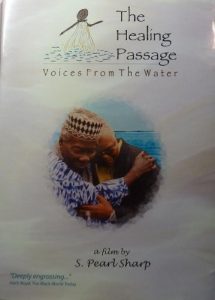 DVD cover for S. Pearl Sharp’s “The Healing Passage: Voices from the Water” (2004) 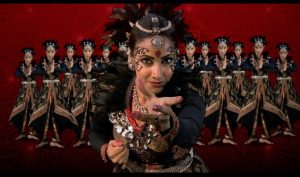 For more about this project see here.

Johnson believed that artistic and technical innovation often go hand and hand. In what was likely the first digital feature documentary film to screen at the Museum of Modern Art, Johnson served as film editor for “Ann Sothern: the Sharpest Girl in Town”, a feature documentary about one of Hollywood’s first female TV producers; Academy-nominated actress Ann Sothern which was conceived and directed by Mike Kaplan. It premiered as work-in-progress at MOMA in 1997. That same year, for the 50th Anniversary of the Institute of Contemporary Art, London, Johnson was commissioned to produce “Dschungel!” an early digital narrative feature film. 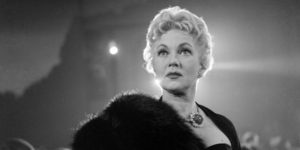 Every project Johnson created was a unique exploration into the zeitgeist and evolution of media as a means of trans-national communication. For Johnson, the more ways in which we learn to communicate, the better the prospect was for true understanding. Sometimes she wrote poetry, other times, pushed the limits of the electronic arts. This was her passion, to always explore and expand. She saw all creativity as a continuum, ranging seamlessly between the arts and sciences.

For some projects, traditional media genres were most appropriate. For example; her Emmy- awarding documentary, “Mia: A Dancer’s Odyssey”, which she co-produced and co-directed with Maria Ramas. ‘Mia” is the compelling the story of an acclaimed dancer, whose life personified the European diaspora of WW2, and the subsequent immigration to the US of numerous artists, including the legendary Ballet Russe de Monte Carlo, of which Mia was a member.

The film had its world premiere at Lincoln Center for the Performing Arts, NYC, and then Broadcast nationwide on numerous PBS stations, and then also broadcast in Germany, Croatia.

For other projects, conventions such as linear narrative structure seemed inadequate to convey the feeling, totality and investigation of the natural world, with its multi-faceted (and multi- dimensional) complexity. For example, “Arboreal Witness”, a site-specific video sculpture, originally commissioned for a 1 night event in Tongva Park, which has been rendered in two formats, one outdoor park installation spanning over 80 feet, with over 100 synchronized video monitors, facing in 2 opposite directions, and a smaller, in door, gallery-friendly version with 40 monitors.

While a PBS style documentary requires skills of a storyteller, with Johnson’s additional skills as an animator and editor, video sculpture required a more non-time-based approach, more intuitive, more experiential and perhaps even more spiritually based. And her work as an engineer/coder allowed her to expand the toolsets which were available to her. 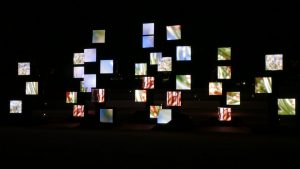 For information about the larger 2016 outdoor version at Tongva park see here.

Perhaps her most ambitious work was 2015’s “Everywhere in Between”, commissioned by Santa Monica’s Cultural Affairs, through a grant from the NEA and facilitated by 18th Street Arts Center. Johnson transformed the unnoticed spaces between the galleries at Bergamot Station into a living, interactive art experience with her massive projections and light installations, including 3 IMAX projectors, several dance companies, 2 bands, and various other performance artists, poets and mimes. KCRW’s Edward Goldman praised it as “the Night to Remember” and said it should become an annual event. Perhaps someday it may, in tribute to her memory.

For more information about this project see here.

As Johnson had said, she delved into the secrets of the natural world, through the tools of the world of technology, finding the universal commonality between them. She brought together her artistic skills as animator, live action cinematographer, sound designed with her technical skills as coder and projection mapper into full play in “Spirits of Morty,” honoring a century-old tree into a luminescent work of video/light sculpture, imaging the thoughts and experiences that this living being has experienced during its century standing in what is now a Santa Monica park.

The content and social commentary of her work ranged from family-friendly to challenging, dependent of course on the intended audience. She saw each audience as unique, and actually part of the art experience itself, and designed her experiences for each of them in unique ways. 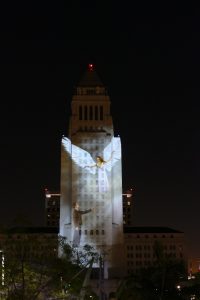 For more information about this project see here.

In addition to her creative work, she has lectured on the role that art must play in world politics & security, at an elite, invitation-only conference attended by government and corporate

officials, as well as speaking, including as keynote, at a variety of other major art and technology conferences including SIGGRAPH.

Throughout her 27-year career, Johnson supported herself full-time as a professional media artist, working in many parts of the United States as well as the U.K., Finland, Turkey, Qatar, Mexico and France.

Yet despite this full-time commitment to her art, she has also managed to find time to also give back through teaching. She was seen as a passionate advocate and inspiration for her students, many of whom have distinguished themselves in their own careers.

As an educator, for over 20 years she taught and mentored several generations of new digital artists as Associate Professor for Digital Media at Otis College of Art & Design, and prior to that taught at the American Film Institute.

Last year, EZTV celebrated its 40th Anniversary, with 4 events staged at the Kandinsky Library, Centre Pompidou, Paris. Kate Johnson spoke and presented at 2 of the 4 events. In August, 2020, three scholars/curators who produced these Pompidou events, will spend an entire month in Los Angeles studying in much greater detail, EZTV’s indispensably seminal, and immense, but still oft-overlooked contributions to LA’s media art history.

This research will focus on 2 important archives, collected, preserved and advocated for, for over 25 years by Johnson. These archives include materials available nowhere else in the world, of important but under-represented Queer artists, long lost and largely forgotten, through the AIDS pandemic. Although cisgender, Queer leader Michael Kearns, has called her a hero to the Gay community, and although Johnson does not have AIDS, because of her commitment to preserving the work of artist lost to AIDS, Kearns also called her an “AIDS survivor”.

Hopefully these visiting French scholars will also recognize Johnson’s contributions not only to EZTV’s history, but to media art history as a whole.

In additional to her Emmy Award, Kate Johnson has been the recipient of a number of other awards and honors, including the Golden Mic Award, three Telly Awards, as well as special Commendations from both the County of Los Angeles as well as the City of Santa Monica.

Believing in the notion of STEAM and not merely STEM, she saw the relationship between art and science as a creative continuum and not antithetical opposites, with overlaps in many places along the innovation spectrum. As part of the 35th Anniversary of EZTV in 2014, she collaborated with physicists at Fermi Lab as well as University of Michigan. 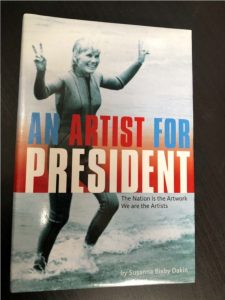 Her last completed works were a 7-channel video installation exhibited in the windows of the former Barnes & Noble at the 3rd Street Promenade in Santa Monica, as well as a 2 channel large-scale projection presented as a special event in the Los Angeles Zoo, and a mini- documentary on a seminal women’s organization.

At the time of her death, Kate was producing/directing with long-time partner Michael J. Masucci, a video profile on Frederick Nicholas, in collaboration with Anthony Nicholas of Lapis Press. In addition, Johnson & Masucci were collaborating, with Maryland-based neuroscientist Gregory Carpenter, exploring ways of translating actual recordings of dreams and thoughts into Digital Art. She had hoped to one day stage internationally, the results of these ground-breaking experiments in art & technology.

For 20 years, she was an artist-in-residence at the 18th Street Arts Center, where she has shepherded EZTV into its inevitable and long-overdue historification, in places as varied as UCLA, the Centre Pompidou, and USC, whose ONE Archives has acquired much of EZTV’s early works.

She craved transforming non-traditional spaces into art spaces and collaborating with the like- minded. Among her early such collaborations was “Almost There” with Loretta Livingston, turning the 7th Street Metro station platform into an immersive live and installation experience, with massive projections, live dance and music.

Kate Johnson’s belief in EZTV’s role as “Art as Anthropology”, was typified not only in her numerous art projects and interventions in a variety of media, but is perhaps gleaned best through her short essays which document the depth of persons and experiences she has known firsthand, such as:

We haven’t Forgotten How to Live:

Kate had just completed a collaboration with her long-time collaborator Barbara T. Smith, assisting Smith on the creation of her long-awaited and soon to be published book What you need to Know about Smith’s seminal performance art masterpiece Feed Me. No doubt, this important book will contextualize in the words of Smith herself, this performance art milestone, often praised, sometimes misunderstood, but always at the core of performance art itself.

Kate Johnson was a proud creative citizen of Santa Monica, and equally proud citizen of the Otis College community. But first and foremost, she was the heart of EZTV, saving it from certain demise and nurturing it not only back into health, but on to a world stage and critical acclaim and artistic realization never achieved by its founders.

She will be missed but never forgotten. 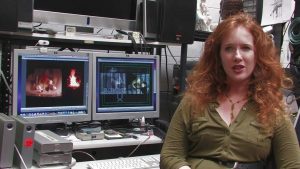