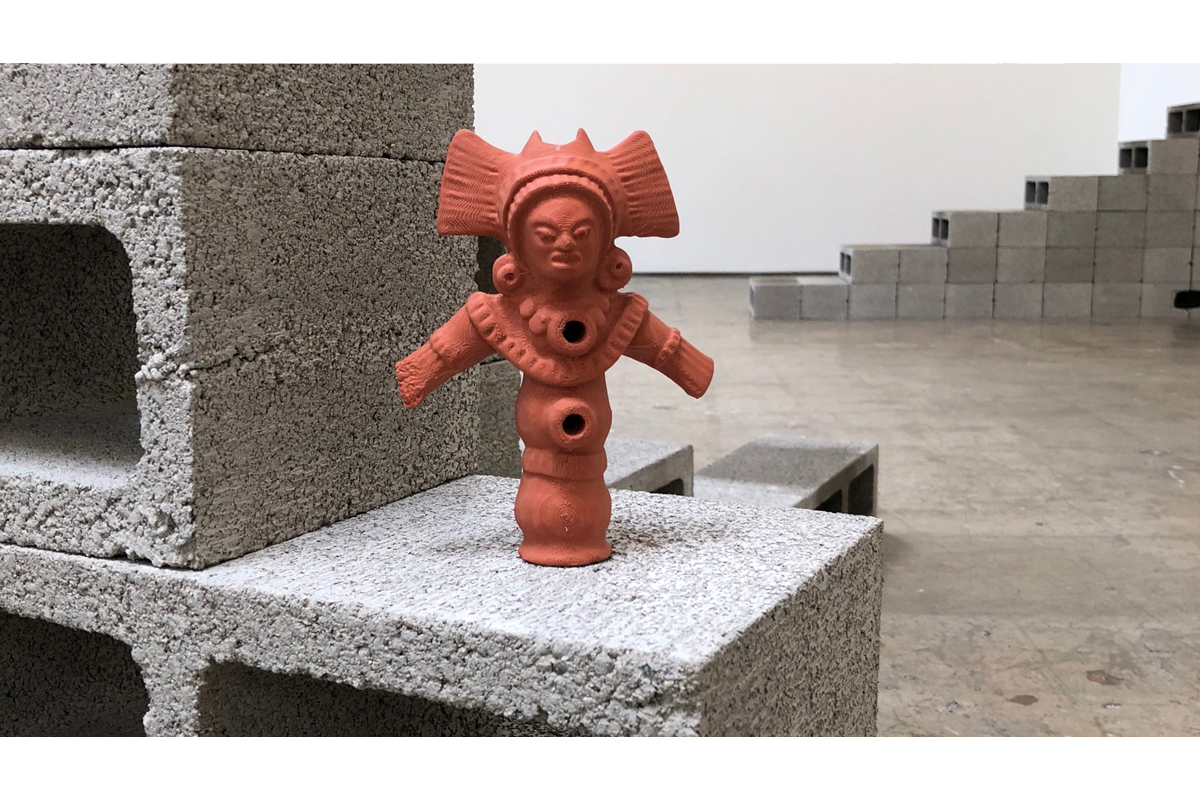 Los Angeles-based artist Clarissa Tossin will present a new body of work centered on her ongoing research into US collections of pre-Columbian artifacts, and their relationship to appropriated pre-Columbian artifacts and motifs. Tossin is conducting research into the forms and sounds of pre-Columbian instruments that will inform a new film concept based on the textile block houses designed by Frank Lloyd Wright in the LA metro area. Tossin will bring a selection of 3D-printed replica instruments from public collections into the gallery at 18th Street Arts Center with the intent to sonically animate the appropriated pre-Columbian stylistic and material influences that make Wright’s houses so distinctive. The resonances and dissonances between “authenticity” of material, of design, and of tone invested in these instruments, and the pastiche or appropriation methodology of the architecture, produce spectres of the imagination that bring established subject positions into question.

Tossin will invite amateur and professional musicians from Central America and Mexico to play these traditional Mayan musical instruments in the gallery, which will be ornamented with a pattern derived from the textile block patterns of the Ennis House. She intends to link the travel of an archeological instrument with the travel of an architectural style, and ultimately, to complicate how cultures are displaced and appropriated.

Also on February 23, Danish visiting artist Maj Hasager presents Iterations in the Atrium Gallery, a project based on the Pico neighborhood of Santa Monica, where she is immersed for six months as an artist in residence at 18th Street Arts Center. Iterations continues Hasager’s interest in investigating the archive-as-process, as well as looking at the area’s multifaceted history, including forced relocations and exile. More information about her exhibition here.

Clarissa Tossin is a visual artist who uses installation, video, performance, sculpture, and photography to negotiate hybridization of cultures and the persistence of difference. By embracing semantic displacements in given material cultural ecosystems, Tossin’s work reflects on circulation from the level of the body to the global industry. Tossin’s work has been featured at the 2014 Made in L.A. at the Hammer Museum, in Los Angeles; the Museum of Contemporary Art Detroit; the Queens Museum, in New York; the Museum of Latin American Art, in Long Beach; SITE Santa Fe Biennial;  the Wattis Institute, in San Francisco; Wesleyan University’s Zilkha Gallery, in Connecticut; Kunsthalle Mulhouse, France; Skulpturenmuseum, Glaskasten Marl, Germany; Center for Contemporary Art, Tel Aviv; SESC Pompéia, São Paulo, Brazil; Fundação Iberê Camargo, Porto Alegre, Brazil; among others. Tossin is the recipient of a Fellows of Contemporary Art Awards (2019); Los Angeles Artadia Awards (2018); Fellowship for Visual Artists from the California Community Foundation (2014); and an Artistic Innovation Grant from the Center for Cultural Innovation (2012). She received a M.F.A. from the California Institute of Arts.

Maj Hasager is a Danish artist based in Copenhagen, Denmark. Her work deals with power structures, identity, memory, architecture, and the construction of history, looking at how these interlinked phenomena are interpreted and represented culturally and spatially. Her artistic approach is research based and she works predominantly with text, sound, video, and photography. Hasager uses oral history interview techniques as a method for accumulating and creating narratives that address personal stories in a sociopolitical context. Hasager’s residency is generously funded by the Danish Arts Council.

Jeannette Ehlers is a video, photo and performance artist based in Copenhagen, Denmark. Experimental imagery characterizes her multidisciplinary work, and for years she has created artworks that engage with resistance towards coloniality. On these changeable terms, meaning and identity are explored, in both a sophisticated and immediate way. Ehlers’s performative and cinematic universes delve into ethnicity and identity inspired by her own Danish and Caribbean background. Her pieces revolve around big questions and difficult issues, such as Denmark’s role as a slave nation—a part of the Danish cultural heritage–which often gets overlooked in the general historiography. Ehlers’ residency is generously supported by the Danish Arts Council.

Nikolaj Recke is an artist based in Denmark whose practice has been called “emotional conceptualism,” and his re-enactments of land art and art history have characterized his work from the beginning. Recke invests his subjectivity (as an artist and a person) in the encounters with the works–not to return to narcissistic self-reflection–but to open these works to the levels of emotional experience that they have traditionally been dissociated from, and expand their intellectual and formal horizons even further with aesthetics involving self-irony, wit, politics, consciousness, and a romantic sense of beauty. Lately, Recke tries to expand the concepts of land art to engage with the artistic migration of material, places, and stories. Recke’s residency is generously supported by the Danish Arts Council.

Marie Markman is a Danish artist that works with art projects combining dynamics of art and urban planning. Markman’s artistic interest primarily merges perspectives like native approaches towards landscape, and industrial farming and activist methods. Since 2011, Markman has artistically challenged questions about beauty/aesthetics in new types of landscapes and in new contexts.  In 2017, she founded The Exploratory Research Laboratory / TERL, a place for subtle yet radical landscape experiments, and functions primarily as a meeting point between artists, researchers, farmers, laymen, and different kinds of professionals. TERL builds on curiosity and the vision of future collaborations all across the Atlantic. All of Markman’s recent work flows backwards from really basic impulses revolving around questions like, “How do I want to live?” and “What kind of future do I want to pass on to the next generations?”  Her work merges research, landscape, and art, revealing theoretical, practical, and professional challenges within urban development. Markman’s residency is generously supported by the Danish Arts Council.

Originally commissioned by the City of Los Angeles Department of Cultural Affairs for the exhibition Condemned to be Modern as part of Getty Foundation’s Pacific Standard Time:LA/LA. Choreography/Performer: Crystal Sepúlveda; Cinematography: Jeremy Glaholt.