Sourdough bread has swept the imagination of America and filling its ovens during quarantine. Sourdough Sensations is a program of Sea Change. Join us from Cafe Bolivar for a screening of Nao Bustamante’s ASMR short film Breadphones and a live conversation with Nao Bustamante and Evan Kleiman from KCRW’S Good Food. They will be discussing sourdough best practices, among other things. Marcus Kuiland-Nazario will be in conversation with Jose Carvajal, from Cafe Bolivar. Sourdough Sensations will be recorded and available for viewing post-event. 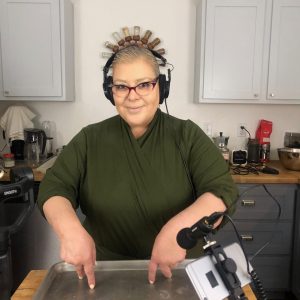 Nao Bustamante‘s precarious practice encompasses performance art, video installation, filmmaking, sculpture, and writing. Bustamante has presented in galleries, museums, universities, and underground sites around the world. In 2020 Bustamante’s forthcoming 360º film, “The Wooden People” received a producing grant from the Mike Kelley Foundation and will be presented at REDCAT in 2021. Bustamante’s new project, “Bloom,” the redesign of the speculum, will be supported by the COLA award and the ArtPace residency. Bustamante is alum of the San Francisco Art Institute, and in 2020 she was awarded an honorary doctorate degree from her alma mater. She is a Professor at the USC Roski School of Art and Design. There, she also serves as the Director of the MFA in Art.

Breadphones is a new ASMR (Autonomous Sensory Meridian Response) video by Nao Bustamante. Staying home during the pandemic meant baking sourdough bread for many. Bustamante delves into the practice, triggering gentle tingles through tracing, brushing, tapping, and of course scraping and working fresh sourdough. She becomes the sourdough and eventually, the fresh bread delivers a cosmic and joyful message.

Evan Kleiman is a former restaurateur, cookbook author and longtime host of KCRW’s Good Food, a radio show and podcast.

Sea Change is produced by Marcus Kuiland-Nazario in conjunction with the 18th Street Arts Center and is generously supported by Art of Recovery, an initiative of the City of Santa Monica Cultural Affairs, santamonica.gov/arts/artofrecovery, with additional support from Los Angeles County’s WE RISE LA program, Trade City, and 18th Street Arts Center.