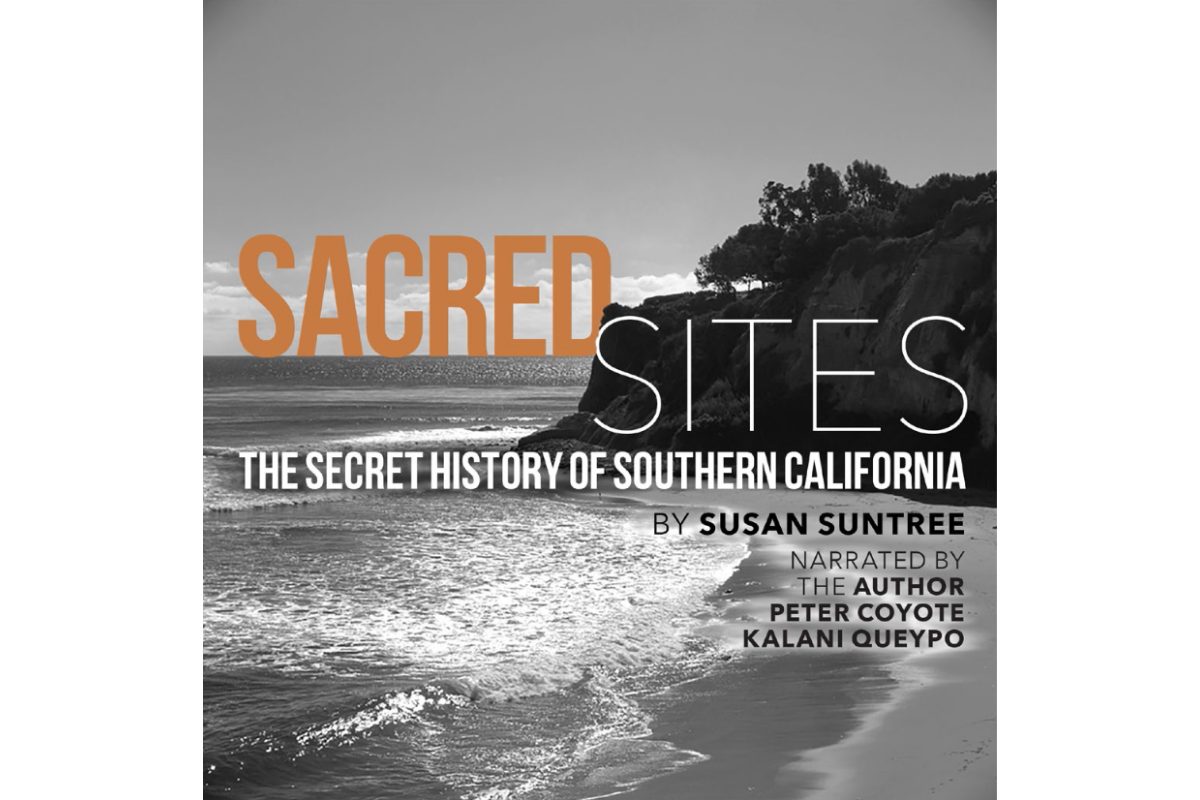 Join 18th Street Arts Center artist in residence Susan Suntree for an online launch party of Suntree’s Sacred Sites Audio Theater Project on March 6, 2021. This is an audio production of Suntree’s best-selling, award winning book Sacred Sites: The Secret History of Southern California (Univ. of Nebraska Press). Audio clips from the Theater Project will be presented, including an audio-visual portrait of the Los Angeles River and the Ballona Wetlands read by Susan Suntree; and an audio clip from Book Two (Indigenous Myths and Songs) read by actor Kalani Queypo. The following discussion and Q&A will focus on the process of creating the Audio Theater project, including a panel with Tom Keegan (Director), Tom Zehnder (Composer),  and Gopika Sharma (Producer).

A history that is equal parts science and mythology, Sacred Sites offers a rare and poetic vision of a world composed of dynamic natural forces and mythic characters. The result is a singular and memorable account of the evolution of the Southern California landscape, reflecting the riches of both Native knowledge and Western scientific thought. It is the winner of the Southern California Independent Booksellers Association Award and winner of the PEN Oakland–Josephine Miles Literary Award.

“Sacred Sites honors the power and beauty of our indigenous heritage and homeland. By knowing our history, we better understand the present and our journey into the future.”

Susan Suntree is a poet, performer, and essayist whose work investigates the dynamics of science, art, and spiritual philosophies as they engage contemporary life. She has presented her poetry and performances nationally and internationally and has published her poetry in many journals and anthologies. Her book length nonfiction epic Sacred Sites: The Secret History of Southern California (Univ. Nebraska Press), also released as audio theater, won the Southern California Independent Booksellers Association Award for Nonfiction, the PEN Oakland Josephine Miles Award for Poetic Narrative, and a Mellon Foundation Elemental Arts Award. Suntree adapted the Universal Declaration of Human Rights as a poem that is set as a choral work by award-winning composer Adrienne Albert and frequently performed (A Choral Quilt of Hope: The Universal Declaration of Human Rights). Suntree’s books and chapbooks include Eye of the Womb (Power Press) also published in Madrid (Vision Libros) as a bilingual edition, El Ojo de la Matriz;.Tulips (Exiled-in-America Press), a bilingual chapbook of translations of poetry by Spanish poet Ana Rossetti; Rita Moreno (Chelsea House); Wisdom of the East; Stories of Compassion, Inspiration and Love (Contemporary/McGraw Hill) for which the Dalai Lama wrote the foreword. She has published essays and book chapters about feminist and environmental theatre as well as reviews in Poetry Flash and Theatre Journal. Suntree’s life-long engagement with environmental and community issues includes creating performances employing giant puppets, poetry, and song to awaken the creative spirit to action on behalf of what is wild, communal, and generous.

Tom Keegan is a BAFTA nominated director who has worked in games, animation, TV, film and theatre. Tom’s training and background is from New York theatre as an actor, director, and choreographer and he is one of the world’s most sought after directors for performance capture and voice over. In addition to directing full time internationally, Tom frequently teaches classes in acting, voice, and movement. As a dedicated fan of Sacred Sites: The Secret History of Southern California. since its original publication in 2010, Tom is ecstatic to be combining his love of theatre and his experience as a voice director on this audio theatre production.

Tom Zehnder is thrilled to bring his years of song production and score composing experience to the audio theatre production of Sacred Sites: The Secret History of Southern California. In addition to scoring well over 80 video games, several films, and TV ads, Zehnder had the privilege of studying bird singing with Ernest Siva while earning his degree in Music Composition from UCLA.

Gopika Sharma is an award-winning producer and editor. Her credits include “Out in India – A Family’s Journey,” “Sweet Life” and “Open Adoption – A Tapestry of Stories,” in addition to producing and editing industrials, games, promos and commercials. She has a long career working for Vivendi Universal Games, Warner Bros., and Sony Pictures Entertainment. Gopika is passionate about creating socially relevant content and is excited to be the producer on this audio theater production of Sacred Sites: The Secret History of Southern California.

Kalani Queypo is a founding member of SAG-AFTRA’s National Native American Committee and serves on the Advisory Council for Native Voices Theater at the Autry. Kalani is an award winning screenwriter for Ancestor Eyes, his self-directed short film that played at nearly 40 festivals, winning 14 awards. Kalani entered into the world of Musical Theater with Missing Peace, enjoying two developmental workshops with Native Voices Theater, received the 2020 Rhinebeck Writers Residency, and was recently featured on Broadway for Biden: In Our America: A Concert for the Soul of the Nation. Kalani can be seen acting in the Oscar-nominated film, The New World, Steven Spielberg’s Emmy winning Into the West and Slow West (Sundance GRAND JURY PRIZE). Television credits include Jamestown, Fear the Walking Dead, Mad Men, Hawaii Five-0, Nurse Jackie, and Bones. Kalani is currently starring in the new CW series, Trickster.