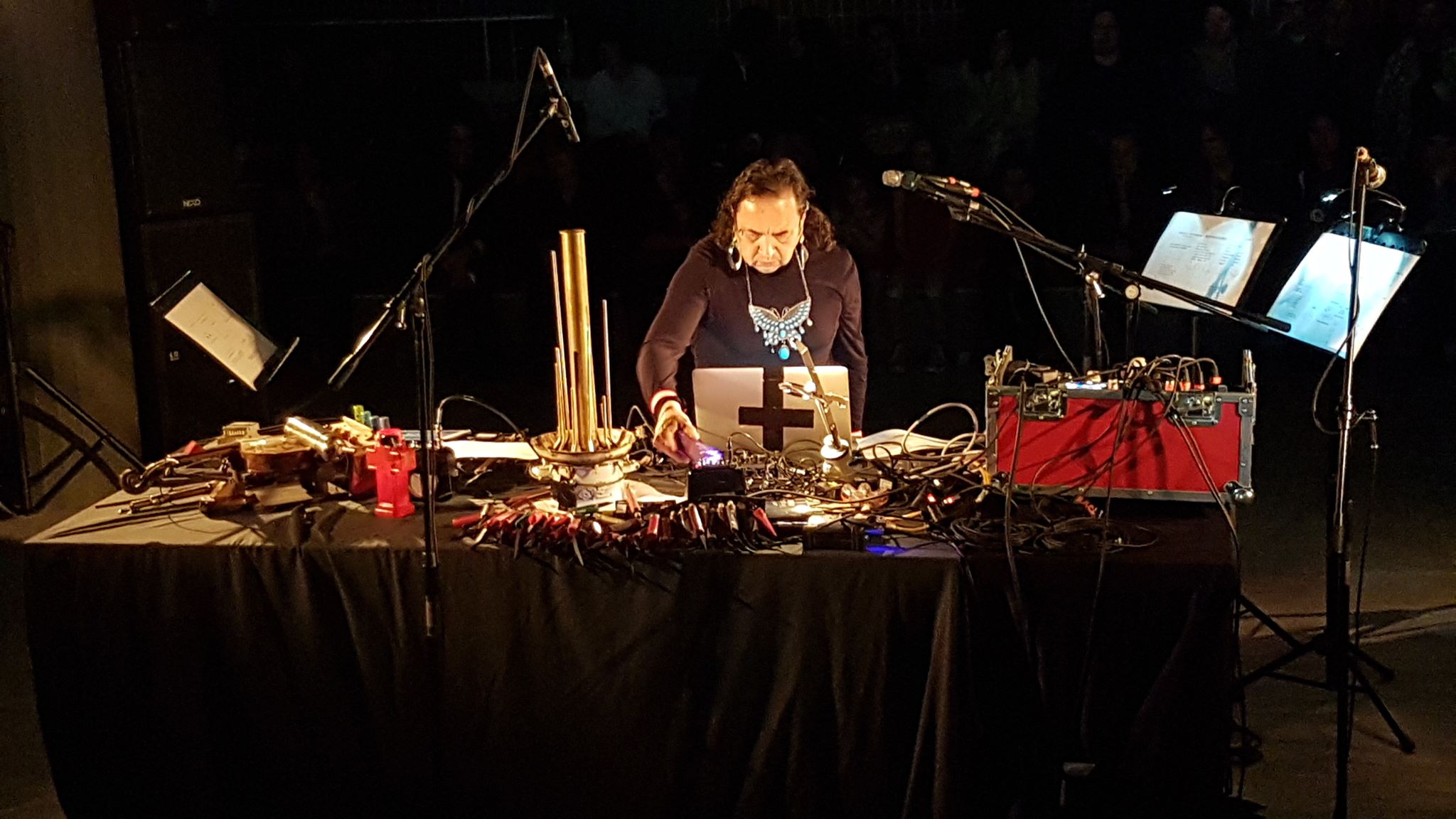 On July 31, 2019 from 7-10 PM at 18th Street Arts Center’s new gallery space at 3026 Airport Avenue, California artists Postcommodity (Kade L. Twist and Cristóbal Martínez) and Guillermo Galindo will perform a new composition performed live and with participants. The material for this new body of work will be gathered from a month of intensive workshops with community members and groups in the Pico Neighborhood to create sound art that includes local histories.

This work is commissioned by 18th Street Arts Center and kicks off the organization’s ambitious Commons Lab public art initiative for the next two years. It will also be the first artist project to be sited in 18th Street’s new gallery space at the Santa Monica Airport.

The scored sound performance will facilitate group listening, communication, improvisation and creative consensus building through intersubjective sonic and performative negotiations of meanings, values and worldviews over time. The work will be a sensory, pedagogical, and consensus building experience that could help build relationships in a generative manner around a set of contested issues. The issues will be determined by a group of committed stakeholders who are participating in skills building workshops, group rehearsals, and a set of short organized performances at Otis in advance of the culminating performance at 18th Street’s gallery.

Postcommodity and Guillermo Galindo’s Commons Lab Residency is generously supported by the Mike Kelley Foundation for the Visual Arts, California Arts Council Artists in Communities, and NEA Our Town.

Postcommodity is an interdisciplinary arts collective comprised of Cristóbal Martínez and Kade L. Twist. Postcommodity’s art functions as a shared Indigenous lens and voice to engage the assaultive manifestations of the global market and its supporting institutions, public perceptions, beliefs, and individual actions that comprise the ever-expanding, multinational, multiracial and multiethnic colonizing force that is defining the 21st Century through ever increasing velocities and complex forms of violence. Postcommodity works to forge new metaphors capable of rationalizing our shared experiences within this increasingly challenging contemporary environment; promote a constructive discourse that challenges the social, political and economic processes that are destabilizing communities and geographies; and connect Indigenous narratives of cultural self-determination with the broader public sphere.

Galindo’s collaboration with Misrach produced Border Cantos, a hardcover bound book published by Aperture Foundation and a traveling exhibit that has been shown at the San Jose Museum of Art, California (2016), Amon Carter Museum of American Art, Texas (2016), Crystal Bridges Museum of American Art, Arkansas, (2017); and Pace Gallery, New York (2017) among many others. Galindo’s graphic scores and sonic objects have been shown at art biennials in America, Europe, Asia and around the world including documenta 14, Kassel (2017), Pacific Standard Time, Los Angeles (2017), and CTM Festival, Berin (2017).

ABOUT THE COMMONS LAB

18th Street Arts Center presents Commons Lab: Place and Public Life, a series of five new artist commissions anchored by live events, which will consider the roles that institutional architecture and cultural policy play in determining the social life and civic engagement of American communities. Using the Center’s rapidly changing Pico neighborhood in Santa Monica as a test case, the participating artists—Cognate Collective (Amy Sanchez and Misael Gio Diaz), Sara Daleiden, Guillermo Galindo with Postcommodity (Cristóbal Martínez/Kade L. Twist), and Jimena Sarno—will engage art audiences and local communities in a dialogue about the role art should play in the public sphere. The project is informed by Postcommodity’s “2043” initiative, an ongoing investigation into the U.S.’s postcolonial future in which non-white populations will become the majority nationwide. For Commons Lab, artists will envision new models of cultural institutions that are capable of destabilizing traditional hierarchies between the more informed, “core,” audiences of contemporary art and the larger public—breaking down barriers to broaden participation. The artists’ findings will be presented in exhibitions of drawings, sculpture, installation, social practices, sound art, and digital media, as well as through public programs such as dinners, workshops, and panel discussions with local partners, including the Santa Monica Public Library and Santa Monica High student groups.

Our gallery and event spaces are fully accessible, with ground level entrances with no steps. Upon requests for assistance, we will make programmatic aspects of our projects available in accessible alternative formats. You can email requests or questions at communications@18thstreet.org.