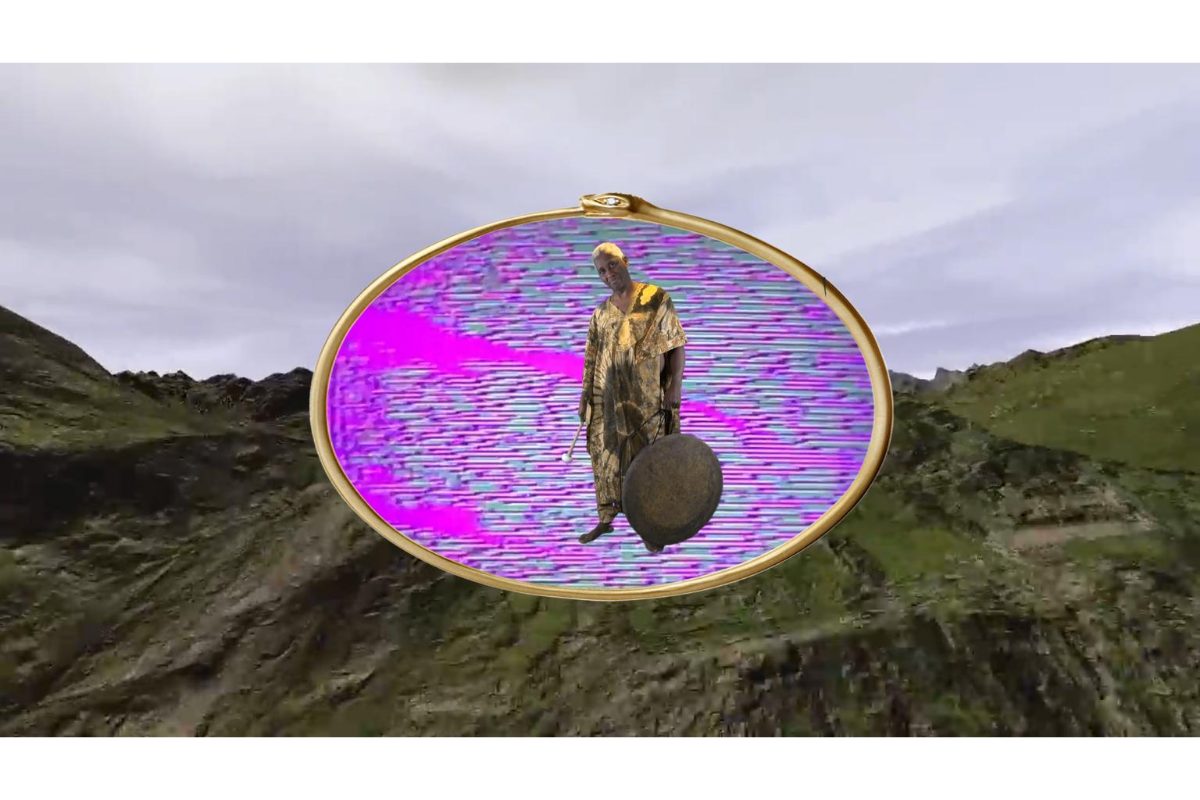 18th Street Arts Center presents its annual benefit event, a virtual evening of performance, video arts, and experimental film. Curated by Jheanelle Brown, the evening will present a series of future visions through the eyes of artists and filmmakers in a live virtual experience. The program includes:

7:30pm – we may seek cosmic marronage but let’s remember our terrestrial obligations – a film program curated by Jheanelle Brown

The film program, curated by Jheanelle Brown, will feature a suite of emerging and established artists working in experimental film and video art. Brown’s curatorial framing centers around the question: “how can the future move beyond the intangible?” As she describes, “The past and the present have been and are an unending assault against Black being and thus looking past survival requires deep wells of emotional and intellectual capacity. Where are we safe? This question has led Black people to look towards the cosmos for an unknown salvation or to understand more deeply our origin. Whilst flight or cosmic marronage can facilitate our imaginative rigor, it is important to not abandon our terrestrial obligations.”

“The filmmakers herein present systems of knowledge that disrupt temporal convention, but are based in rigorous historical examination. The films and videos in this program deconstruct perceived truths and gesture towards the potential for remaking those truths in service of Black self-determination and a liberatory future.”

The program will kick off with an interactive performance created by Ulysses S. Jenkins just for this event, and will end with a live Zoom Q&A with curator Jheanelle Brown and several of the filmmakers who are participating in the screening.

Ticketholders in LA County will receive a selection of performance objects to be used in the interactive performance piece, as well as bespoke drinks by Muddle & Wilde and a dessert box by Southern Girls Dessert to be enjoyed at the screening. These will be hand-delivered on the day of the event. Ticketholders at higher levels will also receive an annual membership to the exclusive Borderless program, a new offering which includes live curated virtual experiences with artists and cutting-edge art spaces around the world.

The event will benefit 18th Street Arts Center’s work during the COVID-19 pandemic to enhance the resiliency of artists and working families during this unprecedented time. Through their Arts Learning Lab online workshops for families, community-engaged artist commissions, timely exhibitions, and artist professional development programs, the Center supports artists and community members to find connection, support, and resources through the arts to foster positive social change.

Ulysses Jenkins is a widely recognized video/performance artist, whose work has been shown in a number of national and international venues. His 1983 video “Cake Walk” was part of Soul of a Nation: Art in the Age of Black Power, which originated at the Tate Modern. Jenkins’ work was also featured in America is Hard to See (2015) at the Whitney Museum of American Art, Watch This! Revelations in Media Art (2015) at the Smithsonian American Art Museum, A/wake in the Water (2014) at the Museum of Contemporary African Diasporan Arts, Brooklyn, Now Dig This!: Art and Black Los Angeles 1960-1980 (2012) at the Hammer Museum, Radical Presence: Black Performance in Contemporary Art (2012), and at the Contemporary Arts Museum Houston, California Video (2008) a major survey of the art form curated by the Getty Museum.

Jenkins was the recipient of the California Arts Council’s Multicultural Entry Grant as artistic director of Othervisions Studio, an interdisciplinary media arts production group. He is a three-time recipient of the National Endowment for the Arts’ individual artist fellowship and was awarded the Black Filmmakers Hall of Fame first place award in the experimental video category in 1990 and 1992. Jenkins is currently a professor in the Claire Trevor School of the Arts at the University of California, Irvine and continues to show his work nationally and internationally.

Jheanelle Brown is a film curator/programmer, educator, and arts administrator based in Los Angeles whose curatorial practice creates frameworks to explore the boundlessness of Black life in experimental and non-fiction film and video. She is interested in the space between fugitivity and futurity and elevating an ethic of care, with special interest in the sonic in film, political film and media, and West Indian film/video. Jheanelle is a board member and an associate programmer for Los Angeles Filmforum. She is currently on faculty at California Institute of the Art and Otis College of Art and Design, as well as curriculum developer for the Centennial High School film club.

ABOUT THE FILM PROGRAM ARTISTS

Larry Achiampong is a 2018 Jarman Award nominated artist; a 2019 Paul Hamlyn Award recipient for Visual Arts and in 2020 received the Stanley Picker Fellowship along with artist Dani Amiss. He completed a BA in Mixed Media Fine Art at University of Westminster in 2005 and an MA in Sculpture at The Slade School of Fine Art in 2008. He lives and works in Essex, and has been a tutor on the Photography MA programme at Royal College of Art since 2016. Achiampong currently serves on the Board of Trustees at Iniva (Institute of International Visual Arts) and is represented by Copperfield, London.

Kitoko Diva’s hybrid practice between photography, film and music create absorbing performance and immersive video installations interacting with identity, race, social structure, technoculture and surrealism. Her work challenges contemporary socio-political economic issues by building alternative landscapes and substitutes realities with new forms of cinematography. She creates series of socially engaged, inclusive cinematic shots with dream-like symbolism traversing space and time to redefine what you think you know about yourself, the world and blackness.

After studying theatre performance, Kitoko Diva started experimenting filmmaking, music and graduated with a BFA in Art History & Archeology, major in Cinema. Her work has been screened at the Tate Modern for Southwark Untold Pempeople and was selected for the 70th edition of Jeune Creation’s performance program in France. Born in Paris, France from Congolese-Angolan parents, she lives and works in London, United Kingdom.

Nkechi Ebubedike is a Nigerian-Jamaican-American artist currently living in New York. She is a MA graduate from Central Saint Martins College of Art & Design, London (2011) and a BFA from the Carnegie Mellon University, Pittsburgh, Pennsylvania. She studied at the École Nationale Supérieure des Beaux-Arts, Paris, France in 2005. Working across painting, sculpture, photography and installation, she experiments with the distortion and suspension of meaningful, culturally significant images. Her life has been peripatetic, she’d lived in Baltimore, rural Nigeria, Paris, London and Florida. Ebubedike’s work reflects this nomadism within her personal history.

Nkechi Ebubedike’s work has been exhibited at the Armory Show and Untitled Art Miami. Her work featured in several art shows and exhibitions in London and Lagos, Nigeria, with Ford Foundation, and in the collection of the Hessel Museum at Bard College.

Yétundé Olagbaju is an artist and maker, currently residing in Oakland, CA. They utilize performance, sculpture, action, gesture, and performance as through-lines for inquiries regarding Black labor, legacy and processes of healing. They are rooted in the need to understand history, the people that made it, the myths surrounding them and how their own body is implicated in history’s timeline.

They hold an MFA from Mills College and are the recipient of the inaugural Nancy Cook Fellowship, the Murphy Cadogan Awards, the Jay Defeo Award, and the Headlands Center for the Arts Graduate Fellowship.

Tabita Rezaire is infinity incarnated into an agent of healing, who uses art as a means to reach Soul. Her cross-dimensional practices envision network sciences – organic, electronic and spiritual – as healing technologies to serve the shift towards heart consciousness. Navigating digital, corporeal and ancestral memory as sites of resilience, she digs into scientific imaginaries to tackle the pervasive matrix of coloniality and the protocols of energetic misalignments that affect the songs of our body-mind-spirits. Inspired by quantum and cosmic mechanics, Tabita’s work is rooted in time-spaces where technology and spirituality intersect as fertile ground to nourish visions of connection and emancipation. Through screen interfaces and collective offerings, she reminds us to nurture each other, the earth, its spirits and to download directly from source.

Tabita is based in Cayenne, French Guyana. She has a Bachelor in Economics (Fr) and a Master of Research in Artist Moving Image from CSM (Uk). Tabita is a founding member of the artist group NTU and half of the duo Malaxa. She is currently working on AMAKABA, her vision for a healing center in the Amazon forest of French Guyana.

Jamilah Sabur is a multidisciplinary artist based in Miami. She frequently references her Jamaican heritage, as well as geography and geology in her pieces, which explore the temporary nature of our world and of our fleeting presence in it, a fact that connects us all. She uses language and landscape to depict the relationship between memory and community. Hammer Projects: Jamilah Sabur was featured at the Hammer Museum, Los Angeles, in 2019. Several galleries and institutions have exhibited her work, such as Pérez Art Museum, Miami; the Museum of Contemporary Art, Detroit, and Cornell Fine Arts Museum, Winter Park. Sabur earned a BFA from the Maryland Institute College of Art, Baltimore (2009), and an MFA from the University of California, San Diego (2014). Her work is included in the permanent collection of the New Orleans Museum of Art and Pérez Art Museum Miami. Sabur will be included in the upcoming U.S. triennial Prospect 5 New Orleans.

Keisha Rae Witherspoon is an independent filmmaker currently based in Miami. Her work is driven by interests in science, speculative fiction and fantasy, as well as documenting the unseen and unheralded nuances of Diasporic peoples. Her most recent film T is currently touring festivals and she is currently writing her first feature film.

Her other life is as Creative Director of Third Horizon, a Caribbean artist collective she co-founded in 2013, whose production work has landed us at Sundance Film Festival, Toronto International Film Festival, Sheffield Doc Fest and many more around the world. Third Horizon hosts our flagship Caribbean film festival in Miami annually, as well as satellite festivals throughout the Caribbean and the States.