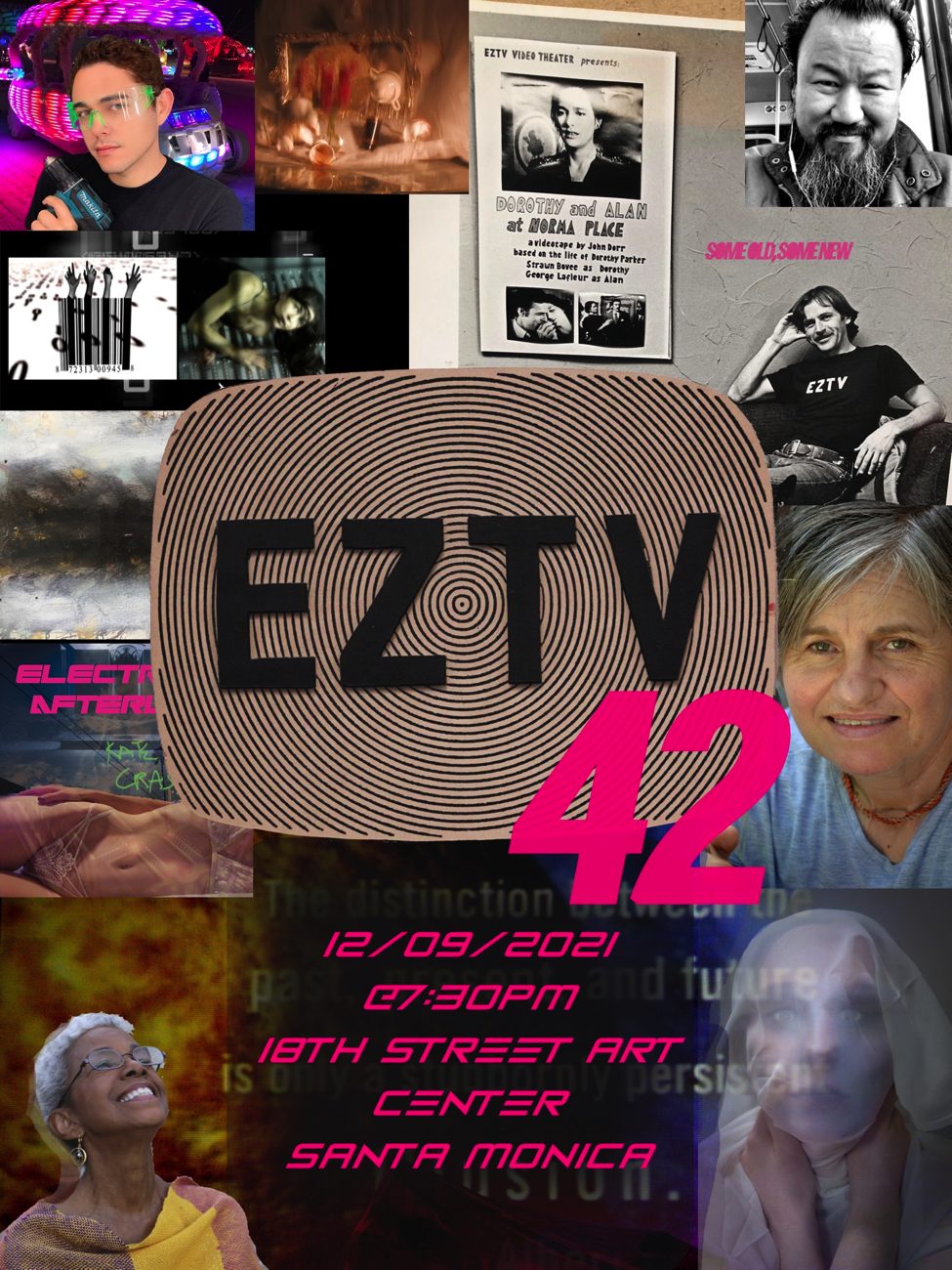 IF YOU WANT TO COME IN-PERSON: Seating is limited, please RSVP.
Masks will be required inside at all times.
Please register here to come in-person.

IF YOU WANT TO PARTICIPATE ONLINE: You can tune in to the event, which will be livestreamed on Zoom. Please register here to receive the link.

Beginning with a preshow including classic EZTV videos with the psychedelic philosopher Dr. Timothy Leary (1920-96), and beat poet Allen Ginsburg (1926-97), early digital animation by Shelly Lake, and featuring video projections by Victor Acevedo, the evening will then unfold into a glimpse of the wide range of artists which work with or have worked with this seminal Los Angeles alternative art space.

In addition to recognition of our past four decades, with some of our archive, including short videos by EZTV founder John Dorr (1947-1993) and EZTV’s long-standing co-director Kate Johnson (1969-2020), we will be honoring the recently deceased early curator of digital art, and Co-founder of EZTV’s CyberSpace Gallery, Patric Prince (1942-2021).

The featured presentation of the evening will be the premiere of Kate Crash’s “Electronic Afterlife,” a long-form music film, about the ownership and hackable ramifications of humans’ physical convergence into AI and the metaverse. Other highlights include the launching of Artivist S. Pearl Sharp’s book What You Left Behind published by Writ Large Press, short documentary on the computer scientist creator Chris Germano’s UFO Battery-Powered Art Car, a reading and painting by Melora Walters in collaboration with Chiwan Choi’s “My Name is Wolf,” also published by Writ Large Press, and essayist/filmmaker Nina Rota will read as well as the premiere of a new video art piece by Michael J. Masucci.

EZTV’s tenure and legacy demonstrate the power of independent artists, self-funded, self-actualized and self-driven. Empowered through their efforts to imagine and realize their visons and to build an artistic community always committed to the further exploration of the self and an understanding and appreciation of the lives of others.

ABOUT THE PRESENTERS (IN-PERSON):

Kate Crash is a conceptualizer of the future which manifests in the albums she writes, performs & produces, her video art, performance art, and inventions. She is a Co-artistic Director of EZTV. She will be premiering her long format art music film “Electronic Afterlife” about a character who feels overwhelmed by global destruction, oligarchy/technocrats, the impossible beauty and hypersexualized standards of social media, and lack of freedom. She views the simulation as her only salvation and uploads herself. The piece questions, in a future dominated by AI and the metaverse where the cloud is owned by the powerful elite- who owns our thoughts, who owns our bodies, who owns the future, who owns the servers? She wrote, recorded and produced the album in 2018 foreseeing the Great Reset. She has directed and edited the film which was shot by Michael J Masucci who also offered additional computer animation. Katecrash.com

Chris Germano is a computer scientist as well as a creator of art objects, fashion and large-scale electronic experiences. He builds art cars, gadgets and tech. The documentary will reveal “The Enterguise”- an operational and fully electric, lithium ion, solar paneled, ecofied, smart art car with 30k RGB LED pixels on the completely 3D printed saucer that can stream visualizations and has a dance floor. It was featured in MotorTrend. www.instagram.com/netslayer

Nina Rota is an essayist, filmmaker, and queer philosopher. She is, hopefully, in the last stages of writing a book of essays titled Walls Crumble Before Me… which she will be reading from. ninarota.com

S. Pearl Sharp is a writer, filmmaker, actor, artivist and former NPR commentator. She will be premiering her new poetry chapbook What You Left Behind with publishers Writ Large Press and The Accomplices. Sharp’s work uses straight forward and poignant verse to take a long look at loss, both familial and extraneous, and questions whether one has the ability to recover from grief or simply to transmute it? https://spearlsharp.com

Chiwan Choi is the author of four collections of poetry, including The Yellow House (Civil Coping Mechanisms, 2017). Choi is the cofounding editor of Writ Large Press and lives in Los Angeles, California. The Artist, actress, mother, poet, filmmaker Melora Walters will be reading and showing work inspired from Chiwan Choi’s “My Name Is Wolf.” melorawaltersart.com
nameiswolf.com

Victor Acevedo is considered a desktop computer art pioneer as he was an early adopter of pre-Windows personal computer (IBM PC) software to create fine art in the early 1980s. Since 2007 his primary focus has been working with video and producing (electronic) visual music works. His hybrid imagery tends to combine figuration with geometrical abstraction and sometimes it’s just pure abstraction. Recently Acevedo has ventured into the NFT space. You can find his first collection called Anonymous Real-time on OpenSea. https://www.acevedomedia.com

Patric Prince (1942-2021) was an art historian and theorist specializing in the history of computer art. Prince was a co-director and founder of EZTV’s CyberSpace Gallery in West Hollywood and she organized the SIGGRAPH Traveling Art Show from 1989-1996. Over a period of years Patric amassed one of the most extensive collections of computer art, consisting of around 200 original art works, and a substantial archive charting the rise of computer-generated arts. The Patric Prince Collection is at the Victoria & Albert Museum in London, England. http://www.vam.ac.uk/content/articles/t/v-and-a-computer-art-collections/

Writ Large Press is an independent literary press in Los Angeles dedicated to making publishing accessible, amplifying diverse voices, and creating public literary events that call for participation by and the preservation of communities, such as DTLAB, a pop-up bookstore and performance space project; PUBLISH!, a continuing underground publishing project; Grand Park Downtown BookFest, a festival for LA writers and publishers; and #90X90LA, a summer long festival of 90 events in 90 consecutive days. https://theaccomplices.org

Michael J. Masucci is a founding member of EZTV, serving as director since 1993, and a member of the 18th Street Arts Center community since 2000. Masucci is a frequent speaker on the intersection of culture, technology, and society. He has been a guest lecturer and presenter of his work at a variety of institutions including the Kandinsky Library at Centre Pompidou (Paris), the Institute of Contemporary Art (London), the National Conference for the College Art Association, SIGGRAPH, UCLA, USC, CalTec, the New School/Parsons, the University of Helsinki, Changchun Film Studios (Jiln, China), Humanity+, Hack in Paris, and Hacker Halted. He serves as Chair and Commissioner of the Santa Monica Arts Commission and previously taught at Otis College of Art & Design. https://eztvmuseum.com/about-michael-masucci