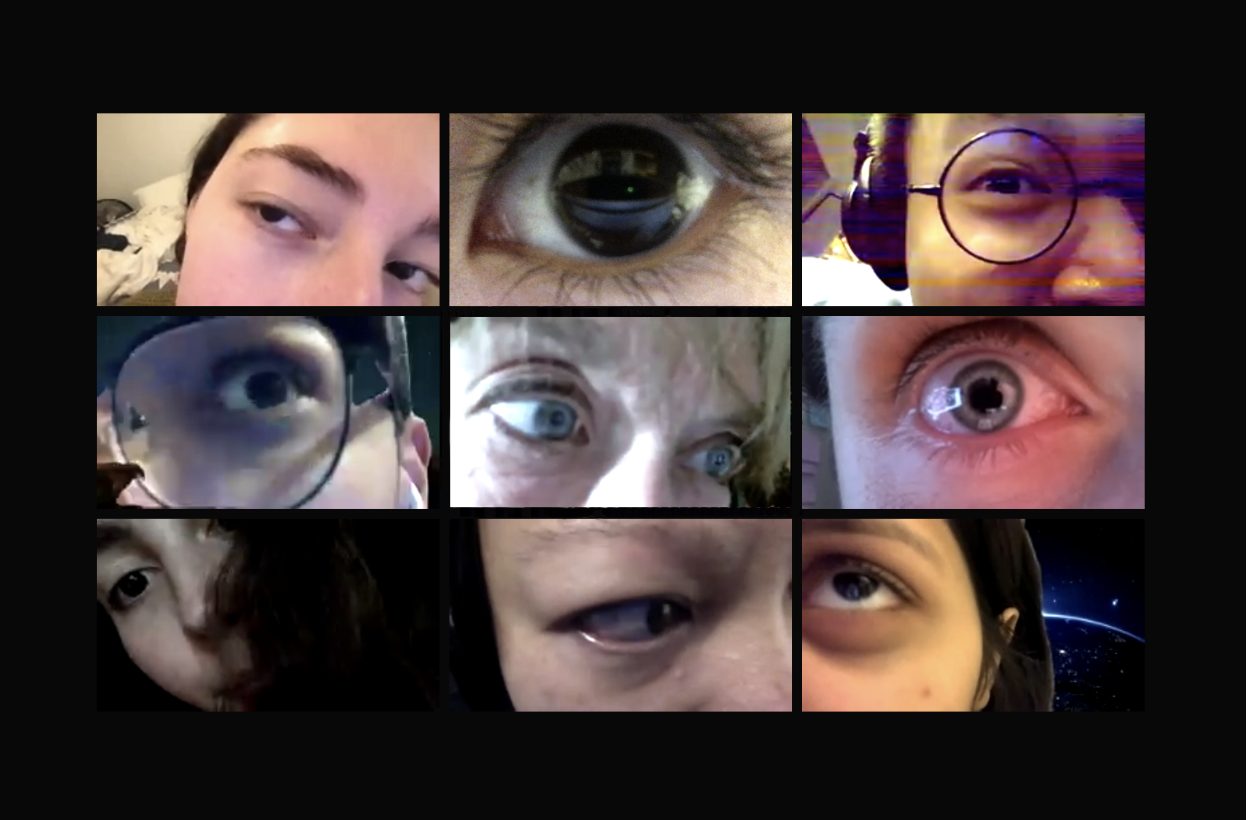 The pandemic has forced many into isolation. With the increased proximity to the camera and the norm of webcams, we are becoming witnesses to the world.

In an evening of performance artworks, Come a Little Closer, artists explore the concept of online witnessing, questioning what it means to be present with the realities of others through the screen. Rejecting the act of viewing performance as voyeurism, the artists are choosing to alter acts of looking into acts of witnessing, implying a support of each other’s practices, and realities. Witnessing engages our reflections and caring as participating artists take a look at gender, religion, colonialism and memory as seen through the lens of each other’s works.

This cohort of performance artists employ an amalgamation of disciplines and mediums in their practices including escapology, embodiment, music and virtual reality, coming from their intensive exploration with each other on how audiences view art in the digital age. Formed in Suzanne Lacy’s class at the University of Southern California’s Roski School of Art and Design, the group includes Vrinda Aggarwal, Gabrielle Shira Broome, Sean Doran, Jiyoon Kim, Hings Lim, Jose Guadalupe Sanchez, Diane Williams, and Rachel Zaretsky; as well as special invited guests, Nao Bustamante and Marcus Kuiland-Nazario.

Rakta Mikvah (Blood – Mikvah) — Gabriella Shira and Vrinda Aggarwal
Gaby and Vrinda’s performance marks the beginning of a year-long holiday cycle exploration between Vrinda Aggarwal and Gabriella Shira Broom respective religions of Hinduism and Judaism. They perform each other’s exchanged rituals while prohibiting individual research of the other’s religion. In accordance with the observances of  Nidah,  Vrinda must insert a bedikah cloth in her vagina to check for lingering menstrual blood for seven consecutive days before being able to ritually purify in the Mikvah. Shira’s performance as the Hindu Goddess, Kamkhya, worshipped for her yoni (uterus/vagina),  is an interpretation of the three day festival of  Ambubachi Mela. The rivers are turned red in this time as this is a celebration of the Goddess’s period during which devotees receive a rakta-vastra (blood-cloth) from the temple.

Man to Man – Jose Guadalupe Sanchez and Sean Doran
As children, boys are taught that being a man means never showing weakness, to contain and restrain their emotions, and to find strength in independence. “Vulnerability” has been left out of the masculine rhetoric, replaced with words of power, violence, aggression, and stoicism, leading to the current epidemic of toxic masculinity. Through the acts of witnessing and acceptance, the performance, at its core, begins to investigate the boundaries of masculinity, questioning if such a category needs to exist. In Man to Man, Jose Sanchez and Sean Doran continue to challenge the establishment of masculinity, finding strength through their own vulnerability and the support of the other, the two begin to tear down the stigmas surrounding men.

Witness of Land by Hings Lim
Trees are living time capsules of land. They are witnesses of history. They witness climate changes, migration, colonization, industrialization, and urbanization. They live long enough to witness the long history of displacement and discrimination, as well as the forgotten massacre and killing that took place under their shades. Outlive human lifespan, they are the evidence of the Anthropocene. They are the nonhuman others among the others. Witness of Land is a performance project by Hings Lim that maneuvers augmented reality (AR) technology to bring forth the presence of witness trees. Upon the arboreal survivor and landmark in a neighborhood, the performances summon the absence of the past. The incantations are performed to conjure the memories of land while recalling the human history that still haunts.

Karaoke X’mas by Diane Williams
In Karaoke X’mas, Williams embodies the Pilipinx national pastime, karaoke. Almost every Pilipinx household has the Magic Singalong microphone where family members and friends perform their favorite songs to each other. As a former colony of the United States, the Philippines embraces this performative vocal mimicry with its complex roots and specific history of power relations. Williams examines the internalization of colonial identity as she explores the implications of performer and spectator relationship as well as our complicity to the colonial gaze.

A Nonchalant Vacation by Jiyoon Kim
In A Nonchalant Vacation (2020), Kim reflects bewilderment from encountering a habituated guilt inside her about not being diligent enough. She interrogates conditions where she had overlooked her labor when she was continuously working to adapt somewhere. With autobiographical narratives, She seeks surrealistic tasks in everyday places where retraining could be a means of care for her body.

Mucho Mucho by Nao Bustamante
Bustamante creates a glamorous and kitsch video, soothing and revealing as she memorializes the passing of the legendary Puerto Rican astrologer, actor, dancer and guiding light, Walter Mercado (9 March 1932 – 2 November 2019).  Performance Artist Marcus Kuiland-Nazario channels, “the hands”  delicately performing a visual ASMR experience, while exposing the image of Mercado. The graphic for the Mercado pillow was created by Paulson Lee and Bustamante collaborated with Roberto Carlos Lange on the sound score.

Vrinda Aggarwal (b. New Delhi) is an artist exploring the ideas of gender, identity, culture, institutional critique and social change through performance art.  Her work explores her growing up in New Delhi and studying in Los Angeles. A large aspect of her work deals with the perception of the female body across different contexts including location, religion and social media.

Gabrielle Shira Broome (b. New York)  is a painter, ceramicist and interdisciplinary artist whose work explores the intersections of Judaism, spirituality and the delineation of ritual value. She draws from intuitive imagery, memory and symbolism to create her own ritual objects. When immersing herself into alternative ritual experiences, she uses her handcrafted vessels and experiments with natural dyes and processes.  Through the lens of performativity, she gives herself permission to disintegrate societal expectation within her religious and day to day life.

Sean Doran is an object maker and performing artist whose artistic practice explores and investigates the experiences of masculinity, grief and loss through meditative rituals and interactive sculptures.

Jiyoon Kim is an interdisciplinary artist who considers the accumulated material and psychological side effects of the constant processes of training and habituation to which the body is subject in her installation, video, and performance-based practice.

Hings Lim (b. Kuala Lumpur) is a process-oriented artist who addresses the interconnectivity and performativity of things. His works, often participatory, explore the notion of becoming while echoing the rethink of the in-between of subjectivities.

Jose Guadalupe Sanchez is an interdisciplinary artist. His work is an investigation of the interaction between varying cultural value systems and how they manifest in the body as well as in groups. These explorations manifest as performance, painting, video, and socially engaged art projects.

Diane Williams is an interdisciplinary artist exploring colonial legacies and its impact on the disproportionate absence of the diasporic Pilipinx identity and community in the United States.

Rachel Zaretsky is an artist who uses performance, video, and photography to challenge our relationship to the creation of memories. Her inquiry-based practice examines how modes of representation can portray absence, how we process loss, and our desire to preserve through memorialization.

Marcus Kuiland-Nazario is an interdisciplinary artist, curator and producer. Kuiland-Nazario’s works are long-term research based cross-genre projects exploring extreme states of emotion such as grief, anger and loss influenced by the cultural and spiritual traditions of the African Diaspora.

Nao Bustamante‘s precarious practice encompasses performance art, video installation, filmmaking, sculpture and writing. Bustamante has presented in Galleries, Museums, Universities and underground sites around the world. In 2020 Bustamante’s forthcoming 360º film, “The Wooden People” received a producing grant from the Mike Kelley Foundation and will be presented at REDCAT in 2021. Bustamante is alum of the San Francisco Art Institute, and in 2020 she was awarded an honorary doctorate degree from her alma mater. She is a Professor at the USC Roski School of Art and Design. There, she also serves as the Director of the MFA in Art.