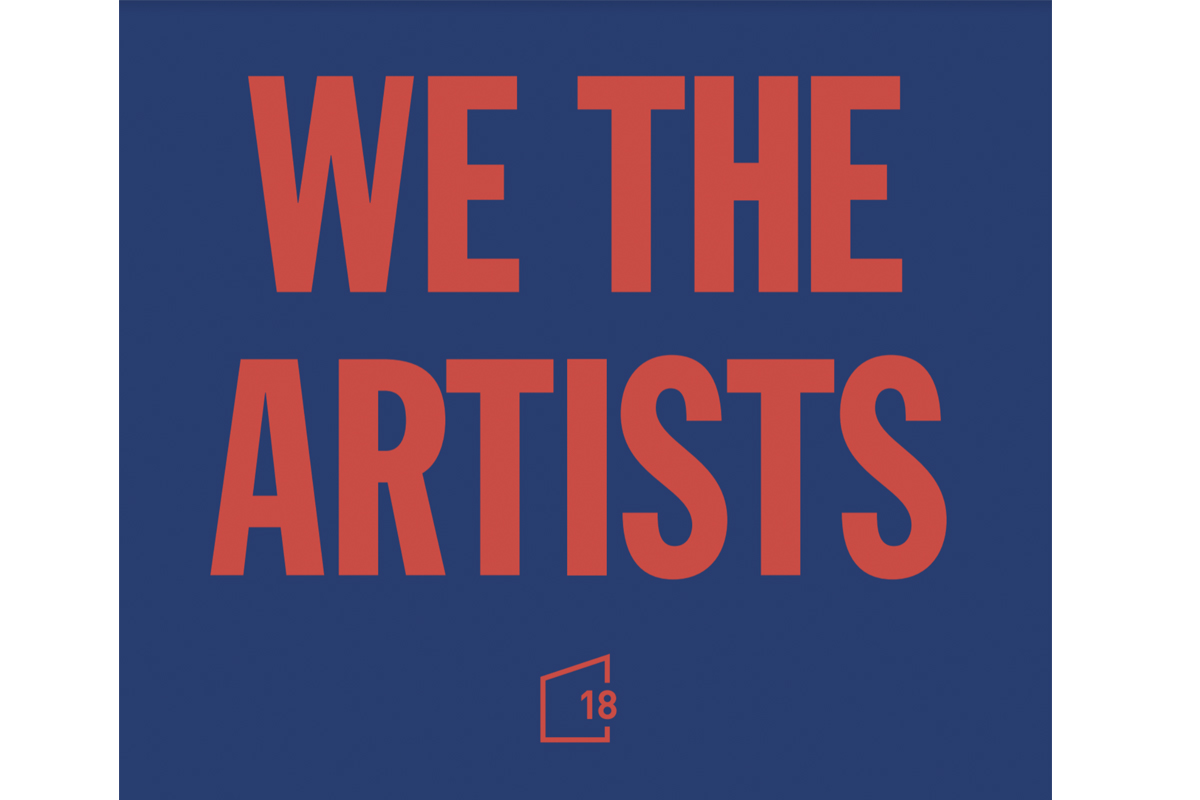 RSVP here for a free ticket.

Amitis Motevalli, performing Know What You Dismantle: Critical Integrated Pedagogy #25, part of a series of pedagogical projects looking at revolutionary transformation through integrated learning. The Declaration of Independence is projected, read and corrected/adjusted to be inclusive and reflective of peoples systematically excluded from agency toward governance.

Kenyatta A.C. Hinkle, giving Kentrifican consultations with her nomadic divination instrument, The Manatakean, a new work derived from her long term Kentifrica Project (presented in the Artist Lab at 18th Street in 2017).

Gawdafful National Theater, performing Stigmata in the Rose Garden, a new work written and directed by Asher Hartman, with Brian Getnick, Arne Gjelten, and Tim Reid. This performance proposes to use with the idea of submission, both bodily and psychological, for the greater good through artists’ privileged clown bodies.

Marcus Kuiland-Nazario in collaboration with Paul C. Donald on a new work, 30 Weight Duet, that incorporates a shoulder dolly, feats of brute strength, and a dash of Fred & Ginger.

Founding artist Guillermo Gomez-Peña’s iconic performance troupe. Celebrating their 25th anniversary, La Pocha Nostra have staged legendary performances that cross cultural and artistic boundaries.La Pocha Nostra is a trans-disciplinary arts organization that provides a support network and forum for artists of various disciplines, generations, and ethnic backgrounds. La Pocha is devoted to erasing the borders between art and politics, art practice and theory, and artist and spectator. La Pocha Nostra has intensely focused on the notion of collaboration across national borders, race, gender, and generations as an act of radical citizen diplomacy and as a means to create temporary communities of rebel artists. Every year, La Pocha conducts a summer and a winter performance art school in which Pocha’s radical pedagogy is shared with an international group of rebel artists. Guillermo Gomez-Peña is a founding contributor to the original 18th Street dream.

Asher Hartman is a Los Angeles-based artist, playwright, and professional intuitive who assists creative people to trust their intuition to reach the core of their work. His abstract, comedic plays explore the psychological consequences of living within Western systems of power in an age of chronic crisis.  His works have been shown at Yale Union, Portland, (forthcoming); Machine Project, LA; the Hammer Museum, LA; LACMA; Hauser & Wirth, LA, BAMPFA; The Tang Art Museum, NY, Beijing Performance Festival, among other venues. His workshops in intuitive development, alone and as part of the artist duo Krystal Krunch, have been at the Hayward Gallery, London; Gasworks, London; C/O Berlin; Extrapool, Netherlands; The Walker Art Center, Minneapolis; The Pulitzer Art Museum, St Louis; Crystal Bridges, Arkansas; The Miller Gallery at Carnegie Mellon; the Pérez Museum, Miami, and the New School in New York, among many other venues.

ABOUT KENYATTA A. C. HINKLE

Kenyatta A.C. Hinkle is an interdisciplinary visual artist, writer, educator and performer who lives and works in Los Angeles and Oakland, CA. Her practice fluctuates between collaborations and participatory projects with alternative gallery spaces within various communities to projects that are intimate and based upon her private experiences in relationship to historical events and contexts. Her artwork and experimental writing has been exhibited and performed at The Studio Museum in Harlem, NY, Project Row Houses in Houston, TX, The Hammer Museum in Los Angeles, CA, The Museum of Art at The University of New Hampshire, The Museum of the African Diaspora (MoAD) in San Francisco and What If The World Gallery in Capetown, South Africa. Hinkle was the youngest artist to participate in the multi-generational biennial Made in LA 2012. She is also the recipient of several fellowships and grants including: The Cultural Center for Innovation’s Investing in Artists Grant, Social Practice in Art (SPart-LA), Jacob K Javits Fellowship for Graduate Study, The Fulbright Student Fellowship, and The Rema Hort Mann Foundation’s Emerging Artists Award. Her writing has appeared in Not That But This, Obsidian Journal, IPI Press, and the anthology Among Margins: Critical & Lyrical Essays on Aesthetics, edited by Fox Frazier-Foley and Diana Arterian. Hinkle is represented by Jenkins Johnson Gallery in San Francisco, CA.

Marcus Kuiland-Nazario is based in Los Angeles and is one of the Founding Artists of The 18th Street Arts Center, Highways Performance Space and Clean Needles Now (a street based harm reduction program), former co-director of Crazy Space Gallery, co producer of Max10 performance laboratory, curator and producer of the critically acclaimed (and over a decade old) performance series Pop Tarts. A seasoned street outreach worker and health educator MKN has been confuting and confusing his art life and lived life to the consternation and appreciation of audiences everywhere. His performance works have been featured in the Los Angeles Times, LA WEEKLY, Los Angeles magazine, Life and Times (Los Angeles PBS affiliate), High Performance Magazine, Frontiers magazine, IN magazine, Hoy, The Advocate and Traffic Report. His performance works have been featured in both national and international festivals. Venue highlights include: L.A.C.E (Los Angeles Contemporary Exhibitions), The Mark Taper Forum, REDCAT at the Disney Concert Hall, USC, UCLA, Highways, P.S.122, The 18th Street Arts Center, The Knitting Factory L.A., ICA LONDON(twice), Platinum Oasis (curated by Ron Athey and Miss Vaginal Cream Davis) and the Rompeforma festival in San Juan Puerto Rico curated by Pepon Osorio and Merian Soto. He has taught at Otis College of Art and Design, Highways Performance Space and Beyond Baroque Literary Foundation.

Amitis Motevalli moved to the US in 1977 pre-revolution from her birthplace of Iran and currently lives and works in Los Angeles. Her experience as a working-class trans-national migrant is foundational to her drive for creating art. Motevalli is invested in research, collaboration, and the potential of art to expand thought. She aims to create an active and resistant cultural discourse through information exchange and organizing artists and educators. Her work explores the cultural resistance and survival of people living in poverty, conflict, and war and juxtaposes iconography that questions violence, domination, occupation, and the path to decolonization while invoking the significance of a secular grassroots struggle. She is equally known for her work in Educational Justice, working with youth and communities to gain equal access to civil rights, privacy and pedagogy without profiling. In the fall of 2014, she was the visionary and oversaw a city wide initiative called LA/Islam Arts Initiative, which brought together multiple institutions, with local organizations as well as artists, curators and thinkers to question Art Historical definitions of Islamic Art and regions.

Kate Johnson is an award-winning filmmaker, video artist, and Assistant Professor at Otis College of Art & Design. Her collaborative works have been shown at the Cannes and LA Film Festivals, and MoMA NY, among others. She has collaborated throughout her career with dance companies, creating video art for live performances. Her current, Emmy-nominated film, Mia, A Dancer’s Journey, is a feature-length documentary she co-directed and co-produced about the life of celebrated ballerina, Mia Slavenska. It premiered at Lincoln Center and was broadcast over 200 PBS stations nationwide.

Poyen Wang is a New York based artist from Taiwan. His art practice primarily takes the form of video and installation, creating immersive environments to provoke  viewers’ emotions and imaginations. His work usually derives from personal experience and then evolves into research of the people or places he is associated with in order to explore their collective history and memory. Using digital media, especially moving images and 3D animation as primary medium, he is concerned about how complex and intricate our identities are under the influence of digital culture and globalization. He examines how we perceive the outside world and our own existence in an age when our bodies are extended by advancing technology and our perceptions of reality are deeply intertwined with the cinematic.

He was the fellowship recipient of a government sponsorship for overseas study from Taiwan in 2015 and won the Gold Medal Award at Taiwan National Art Exhibition in 2017. He completed the AIM program at the Bronx Museum of the Arts in New York City in 2018. He received his master’s degree in New Media Art from Taipei National University of the Arts in 2015, and his second master’s degree at the School of Visual Arts with a Paula Rhodes Award in Computer Art in 2017.

Poyen Wang’s residency was generously funded by the Ministry of Culture, Taiwan and supported by Taiwan Academy Los Angeles.

ABOUT EGRETS AND ERGOT

Egrets and Ergot is an experimental post-punk band based in Los Angeles, CA. The sound has been described as versatile, from moody, gothic deathrock to funky, pseudo-no wave with a smattering of industrial clamor. They have a self-realized 12”EP, “Serve Us Tender”, and 11 track LP, “Surfeit of Gemülich” on Cleopatra Records, and upcoming release for 2019 including a 7” single and a four song EP. Egrets have completed five regional US tours, support for the Weirdos, played SxSW 2018, and a handful of mini festivals from San Antonio, TX to Vancouver, BC, including four consecutive years at Echo Park Rising.

Founded and based at 18th Street Arts Center 29 years ago, Highways Performance Space continues to be an important alternative cultural destination in Los Angeles that encourages radical artists from diverse communities to develop and present innovative new works. Described by the Los Angeles Times as “a hub of experimental theater, dance, solo drama and other multimedia performance,” Highways promotes the development of contemporary socially involved artists and art forms. Its mission currently carried out by Executive Director Leo Garcia & Artistic Director Patrick Kennelly, is to develop and present innovative performance and visual artists, promote interaction among people of diverse cultural backgrounds and engage artists and the communities they serve in cross-cultural dialogues about social, cultural and artistic issues.

Taiwan Academy in Los Angeles is a non-profit cultural institute with an aim of promoting Taiwanese arts and culture. Established by the Taiwanese Ministry of Culture, we disseminate information and organize exhibitions, screenings, and other activities that promote Taiwanese visual and performing arts, as well as film and music. By doing so, our program hopes to enhance cultural exchanges between Taiwan and the international community. The Taiwan Academy is a 20-year partner of 18th Street Arts Center and supporter of our Visiting Artist in Residence program.