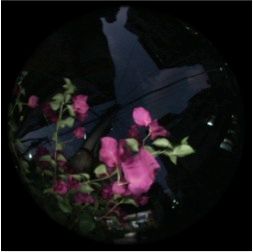 SANTA MONICA, CA – 18th Street Arts Center is pleased to present a solo exhibition of Taipei, Taiwan based artist Chih-Chien Chen, realized with the Taiwan Academy in Los Angeles. Presented in conjunction with a three-month residency supported by the Ministry of Culture, Taiwan, the artist will exhibit an installation of  interactive video works, one of which will be made on-site. The new work will echo his previous video Flowing Pride: Ripple, extending the motif of the Bougainvillea flower.

Chih-Chien Chen’s works focus on the theme of “time”, documenting the city as the spatial embodiment of time’s passage. These works attempt to describe the process of positioning oneself in a city through fragments of visual memory. In this space of memory, the climate is hazy, and the viewpoint is vertical. From an airborne position, the artist employs habitual methods of observation. By intentionally allowing for physical metamorphosis, the artworks come to represent the artist’s thinking space. Each succession of images is arranged vertically with a constant distance maintained between each object shown, and the positions between the layers of imagery are readjusted according to oscillations dictated by the strength of currents. Under these conditions, space changes, with time twisting the third dimension. Using commonplace mechanical devices, Chen describes a logical drift: the experience of being lost in thought, tracing a dérive through the urban landscape.

Chih-Chien Chen is a Taipei, Taiwan based digital artist whose work has been presented in solo and group exhibitions in Taiwan and in international exhibitions throughout Europe and Asia. Chen is a graduate of Tunghai University Department of Landscape Architecture and Taipei National University of the Arts Graduate School of Arts and Technology. In addition to his work as a solo artist, Chen is a member of the digital art collective LuxuryLogico. He has had solo exhibitions at IT PARK Gallery and Galerie Grand Siecle in Taipei, and participated in group exhibitions at Centro Centro, Madrid; He Xiangning Art Museum, Shenzhen; National Taiwan Museum of Fine Arts, Taichung; Museum of Contemporary Art, Taipei; Hong Kong Museum of Art; and Seoul International NewMedia Festival. With LuxuryLogico, his work has appeared at Treignac Project, France; CAFA Art Museum, Beijing; White Rabbit Gallery, Sydney; and at the 2014 Asia Triennial Manchester.

This exhibition receives generous support from the Taiwan Academy in Los Angeles and the Ministry of Culture, Taiwan. 18th Street Arts Center has collaborated with these partners since 1999, fostering cultural exchange by hosting two Taiwanese visiting artists annually.